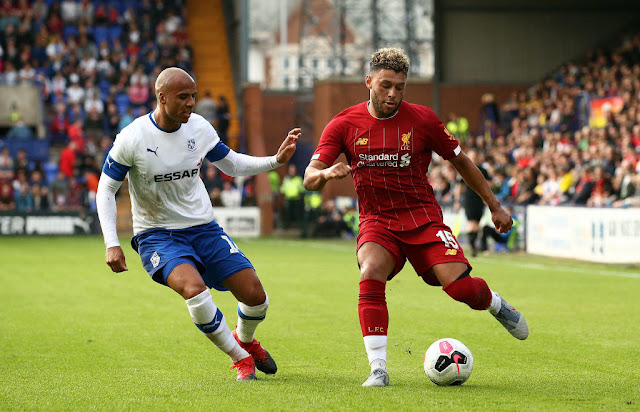 Gomez made a leap out of the defense and after moving about forty yards out, gives Brewster on the left, who then finds Clyde with some defense cutting pass and despite the work still left to do. The youngster placed the ball right at the top corner to give the Reds a deserving lead.

Goal : 38′ 0 – 2 Rhian Brewster
Brewster gets his first senior goal, doing great with positioning and anticipation techniques. Milner crosses the ball in front of the Tranmere goal giving Wilson some trouble. Brewster does well to get at the end to score a glancing header.

Goal : 45′ 0 – 3 Rhian Brewster
Just before the stroke of halftime, Brewster scores another for the Reds. Milner, also in the center of it. After making a full move with the ball to the edged of the box. Davies passes it straight to Brewster  who makes a cool finish.

Goal : 54′ 0 – 4 Curtis Jones
Just nine minutes into the second and the Reds have another goal in. Origi shows great skill retaining the ball, then Passes it in for Woodburn. Its then passed on to Curtis Jones at the far end of the post, who fires a volley past Davies for the fourth.

Goal : 60′ 0 – 5 Divock Origi
Origi can’t help but get on the score sheet too, receiving a nice pass from Matic. He beats the keeper with a few touches before slotting it in.

Goal : 67′ 0 – 6 Paul Glatzel
The game is becoming a spectacle, Tranmere are now six down. This time a ball is fed into the box for Glatzel and he holds it long enough for 18-year-old Bobby Duncan to score.

Subscribe in a reader
Enter your email address:
Delivered by FeedBurner
Goals (0 – 1) And Cards
⚽6′ 0 – 1 Nathaniel Clyne