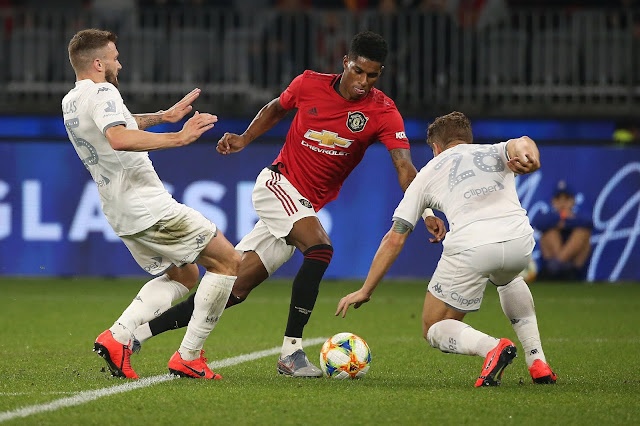 Manchester United take on Leeds United in their second Pre season fixture at the gdhdh. They will look to improve on their 2 – 0 victory over Perth Glory, as they continue their warm up ahead of the coming Premier League season.
Key Moments Recap :

First blood to Manchester United! Pogba slices through the Leeds defence with a reverse pass that Wan-Bissaka latches on to. He then crosses into the six-yard box for young Mason Greenwood, who pokes home from close range after losing his marker with an intelligent shift of pace.

Goal Updates : 27′ Marcus Rashford 2 – 0
And Leeds are made to pay the price for failing to take their chances as Marcus Rashford doubles Manchester United’s lead in style.
Man Utd hit Leeds on the counter before Rashford picks up the ball in the area. He has two defenders blocking his path to goal but a brilliant side step leaves them on the ground and he coolly slots under Casilla.

Goal Update : 51′ Phil Jones 3 – 0
Manchester United their third now as Phil Jones gets on the end of Pereira’s corner and powers a header past Casilla at his near post.That’s Jones first goal for United since March 2014!