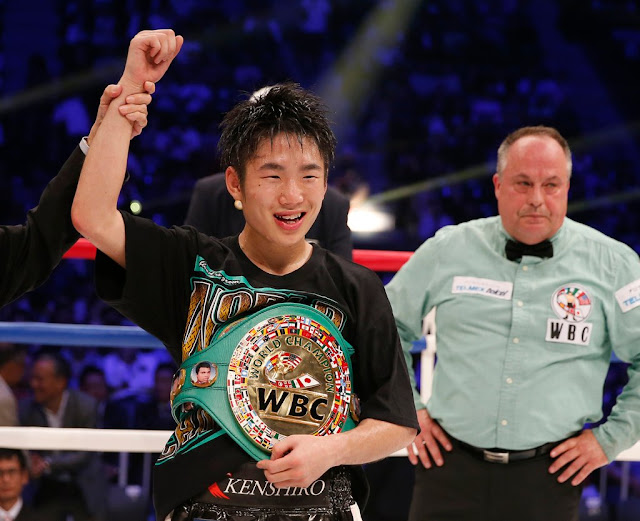 Ken Shiro stayed unbeaten with a masterful performance in dropping and stopping Philippines’ Jonathan Taconing in four rounds to retain his WBC 108 pound title on friday in Osaka, Japan.

The 27 year old needed just a minute in the the fourth round to finish off the philipino challenger in the undercard of Brant-Murata card on Friday evening.

Shiro established his jab early and fought at his desired pace in the opening round. The fight took a different dimension in round two, as Taconing forced Shiro out of his comfort zone, applying more pressure and scored regularly body shots.

Taconing looked like, he was expecting a win out if this one, with his second round performance. In the third the fight still seemed blur till an accidentally clash of heads mid way through the third round almost brought the fight to an unexpected end. The clash opened up a cut on Taconing’s right eye.

Taconing had instigated the clash but due to a WBC rule for clashes, Shiro was deducted a point, as he was the unaffected one after the incident but he maintained his composure to finish the fight on top.

Both fighters came out aggressively inithe fourth round but Shiro was cautious and was able to sence Taconing’s wild left, ducked then took leverage on the miss to land massive right hand that sent Taconing head first to the canvas.

The referee Frank Garza couldn’t comprehend the happenings and was forced to end the fight.

Both fighters were making their first appearance in 2019 and this was Taconing’s third bid at a major title, ending his six fight winning streak with the first knock out loss of his career.

Ken Shiro, who is arguably one of the best in his division registered the ninth knockout of his professional career  retaining a title he won  with a 12-round majority decision over Lopez in Dec. 2017.