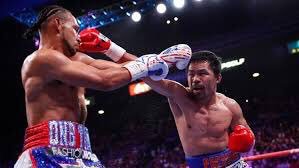 Pacquiao went into the fight a slight favorite against a champ 10 years younger, with many predicting this might be the end of the legends career but the Manny Pacquiao made Thurman look old.

The future Hall of Famer Manny Pacquiao is hoping to turn back the hands of time, when he faces the 10 years younger foe in the “Super” champ Thurman, who posseses height, length and power advantage. Howbeit, Pacquiao is the more experienced and technically better.

Manny Pacquiao is hoping to bring his over 20 years of experience to the ring against a younger foe, something he seems to have gotten used to, as his last four wins have been against younger fighters.

Thurman will look to use his Jab and footwork to keep Pacquiao at bay, while Pacquiao will be out to break down his opponent, as he has always done against younger fighters.

A Manny Pacquiao Win Over Errol Spence Jr. Will Be The Greatest In Welterweight History – DopeClics

[…] Pacquiao will enter the fight an underdog and will be fighting Spence, who has built his whole career at welterweight and has notable physical advantages over the 42 year old Senator but just like Thurman Fight, Pacquiao has built his career in fights he was considered an underdog. […]

[…] 43 year old Pacquiao will walk into the ring for the first time since defeating the formerly undefeated Keith Th… back in July 2019. Pacquiao was later demoted to champion in recess due to inactivity and Ugas was […]

Manny Pacquiao – Everything At Stake In Yordenis Ugas Fight – DopeClics

[…] Manny Pacquiao was last seen in the ring back in October 2019, when he defeated formerly unbeaten WB… However, due to his time away from the ring, he was stripped of the title and Ugas was upgraded to a full champion in January. […]

[…] Pacquiao was fighting for the first time in two years and was last seen in action, when he triumphan… to win the WBA Belt and due to his inactivity, got stripped and the belt handed to Ugas. […]