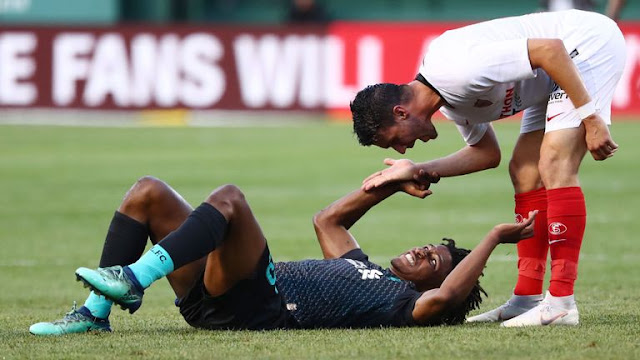 Sevilla’s Joris Gnagnon has apologized for his brutal challenge on Liverpool’s Yasser Larouci, who was lucky not to have surfered an injury following the dangerous tackle in their friendly game 2 – 1 defeat in Boston.

The 18 year old youngster was taken down by Gnagnon in the 80 minute after he tried drifting through the Sevilla midfield and the referee gave him a straight red for the foul but Larouci was stretched out of the pitch and Kloop believes the youngster was very lucky.

“It’s much too early in the season to create headlines by saying what I think but it looks like he was lucky,” Klopp told reporters at his post-match press conference.
“Of course, how it always is with these things we have to wait a little bit.”

Gnagnon apologized for his actions on social media after a plea by the whole team during the game. His apology was directed to the Player, family, friends and fans.

“I would like to publicly apologise towards Liverpool, the family of the player and its supporters.
“It was a heinous act on my part. Whatever the reason, it’s not what should be seen on a football pitch. All my prayers are with the player and his family.”

The game was draw by half time, Origi scored the leveler for the Reds, taping in from six yards to level the scores after Nolito opened the scoring  seven minutes to halftime.

After the Red Card, the Spanish side were able to score a late winner, after breaking away on a counter, Alejandro Pozo scored into an empty net in the final minute.