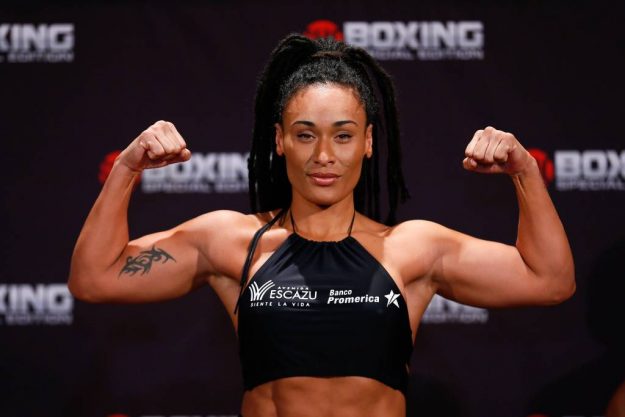 The 20 year old Abril Vidal (8-1, 3 KOs)  was able to give the champion problems and made her earn every round she won till the final bell. Vidal started slow and couldn’t find her range in the first round but in the Second, overcame those short comings and closed the distance.

Gabriels, who had to dig real down for this particular win couldn’t, regained her dominance in the third round, using some effective body shots to slow down her younger opponent.

The fourth round was really close, as Vidal got some remedy for Gabriel’s body shots and used combinations to keep her at bay. Gabriels controlled the fifth and six , using effectively her Jab and seemed to have calculated the range and answers to what really gave the results.

By the 10th round Gabriels had taken total dominance of the fight, slip countering very effectively and connecting with ease, while her opponent was doing just the opposite. Gabriel continued the action til the final bell earn on scorecards 96 – 94 and 97 – 93 twice.