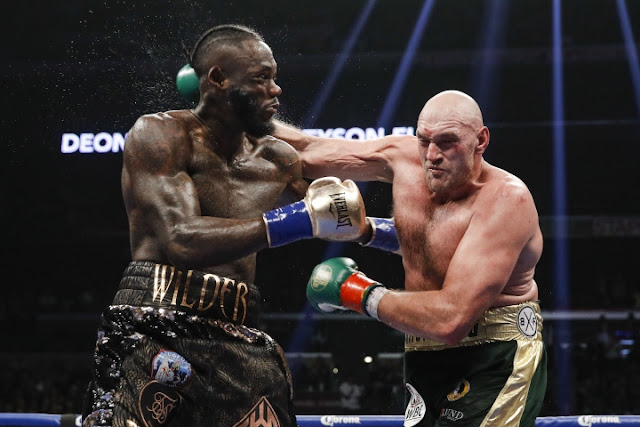 Lineal Heavyweight champion Tyson fury has finally announced the confirmation of a Rematch with WBC Heavyweight  World Champion Deontay Wilder and the fight set for February 22.

The two heavyweight giants Wilder And Fury battled to a controversial draw back in December and afterwards, an immediate Rematch was called off  when Fury decided to sign for sign a co-promotional agreement with Top Rank and ESPN.

Both fighters went their ways, facing other opponents. Wilder Knocked out his mandatory challenger Dominic Breazeale in the first round in May, while Tyson Fury Knocked out previously undefeated German Tom Schwarz inside two rounds.

Both fighters are set to go for another fight each this year before settling the score in February. Wilder has decided to face Luis Ortiz, while Fury is yet to pick his next opponent.

“The Wilder rematch has been confirmed and signed,” Fury said in footage shared on YouTube. “Twenty-second of February, it’s on. This time, I haven’t been out of the ring for three years.

“This time, I haven’t been abusing too much alcohol. And this time, I’m going to knock him the f**k out.”

Deontay Wilder takes a big risk facing the hard Cuban southpaw Luis Ortiz again. Ortiz had Wilder almost knocked out in the seventh round of their first bout but the Bronze Bomber survived and was able to knock him out in the 10th round.