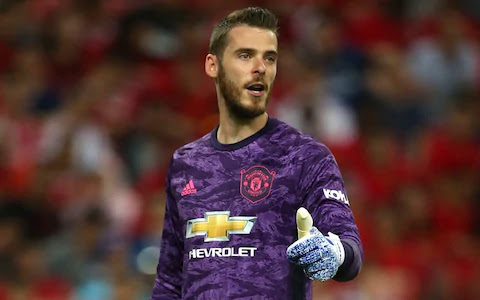 Manchester United No. 1 David de Gea is set has chosen to remain at Old Trafford and is said to be preparing to sign a new six year deal that will see him earn between £350,000 and £375,000 per week, making him the highest paid Keeper.

David de Gea has made clear, he will be delighted  and honored to become the new United captain after been shortlisted along with Paul Pogba, Chris Smalling and Ashley Young as candidates for the position by Manager Ole Gunnar Solskjaer.

David de Gea, who joined Manchester United in 2011 from Atletico Madrid will love to fill in the shoes left empty by the departure of Antonio Valencia at the end of the 2018/19 season.

“I’ve been captain for some games,” De Gea said. “Of course, it is amazing to be captain of a club like Manchester United and defend this badge.
“It’s amazing, so of course I’ll be really, really happy to be captain.”

De Gea who made his first appearance for the Red Devils in the 1 – 0 victory over Inter Milan in Australia, believes it’s time to start impacting his experience on the younger players, teaching them the core values of the Club.

“It’s my ninth season, I feel like one of the most experienced players.
“I need to show that on the pitch and try to help the young guys know what Manchester United means and that’s important.
“We have to improve a lot. We are Manchester United; we need to fight for trophies.
“When you put on this badge, that’s what it means – fight for everything, give your best and bring the team again to the top.”