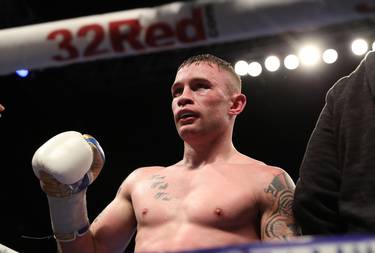 Former two-division champion Carl Frampton will be back in action against hard-hitting Emmanuel Dominguez in a featherweight bout scheduled to take place on Saturday, Aug. 10 at the Liacouras Center.

Frampton, who hails from Belfast, Northern Ireland will be making his first stateside appearance in more than two years and is haunting his way back to a title shot after losing via decision loss to IBF featherweight champion Josh Warrington. He was on a three fight winning streak before that fight.

“Dominguez is a tall, young, hungry featherweight, so I’ll need to be on my game,” Frampton said. “The premise of an Oscar Valdez fight is dangling in front of me, so I want to go out and show the world that I’ve still got what it takes to be a world champion. Winning is always the most important thing, but I want to do it in style. It’s great to be boxing stateside again. And Philly, in particular, has so much boxing history. I’d like to thank MTK Global and Top Rank for giving me the opportunity. I won’t disappoint.”

“Carl Frampton is already looking ahead to an Oscar Valdez fight, which gives me added motivation,” Dominguez said. “I am not a stepping stone. I am coming to Philadelphia prepared to ruin Carl’s plans.”