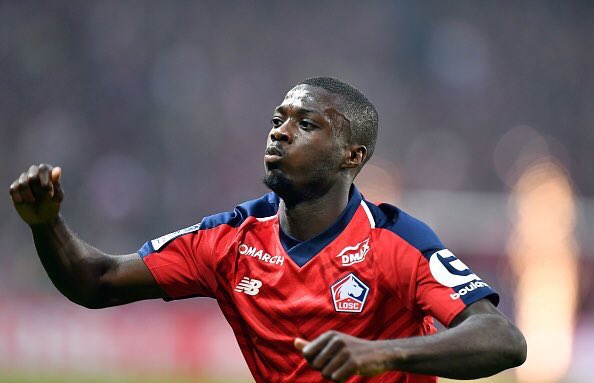 Arsenal FC are making significant progress in their bid to sign Nicholas Pepe from Lille, as the transfer window looms towards closure.

The Gunners have agreed a £72m fee for the winger and Lille president confirmed that the Gunners are now front runners to sign the winger, who was initially linked seriously with a move to Italian side Napoli.

Arsenal made a £4.5m a year offer, which trumped the £3.6m offered by Napoli and invariably left them the winners of the bids and those most likely to get his signature.

Lille President confirmed “We’ve had interest from three UK clubs along with clubs from Spain and a number in Italy.

“We do have relationships with a good few of those clubs where we feel the player would be best suited and we offer our advice, however we can’t do anything if the player doesn’t want to go, so it’s now the player’s decision.”

Arsenal were also seriously linked with a Crystal Palace Wilfred Zaha, who would have also been a perfect fit for the London club but with Ivory Coast international  taking a low fee upfront with the rest paid installmentally. This help made their choice.

Arsenal will be beating their club record transfer £60m fee which was used to bring in striker Pierre-Emerick Aubameyang a year and some months ago, if they are able to get the signature of Nicholas Pepe.

Pepe scored 22 goals with 11 assist for Lille last season and helped the french side to a second place finish last season. This triggered the interests of many UK clubs including Manchester United.