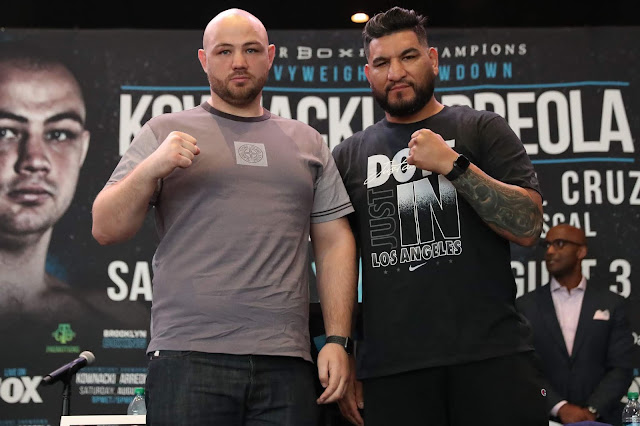 Undefeated Heavyweight Adam Kownacki will take on former title challenger Chris “Nightmare” Arreola in a 12 round battle in front of his hometown fans, at the Barclays Center, the main-event of on PBC on FOX.

Kownacki is looking to climb high into the heavyweight mix after accumulating a nine fight knockout streak, with notable victories against Charles Martin, Gerald Washington and Artur Szpilka.
The #4 IBF, #6 WBC & #12 WBA Kownacki (19-0, 15 KOs) could be in line for a title shot, if he pulls off a win against the seasoned Arreola and this could come sooner than expected, as IBF methods of forcing mandatories could put him up for a title fight soon.
The former two time heavyweight title challenger Chris Arreola will be fighting to save his Boxing Career after promising retirement, if he fails. He has promised to show Kownacki, he is still able to fight at a high level.

The Kownacki – Arreola fight will be supported by Marcus Browne, defending his Interim Light Heavyweight title against former WBC light heavyweight champion Jean Pascal (33-6-1, 20 KOs), the fight will be Browne’s first fight since winning a close decision over Badou Jack.

[…] an tenacity which has earned him knockout victories in five out of his last seven fights. kownacki was last seen in dismantling knocking out veteran contender Chris Arreola in August and before then , demolished Gerald […]