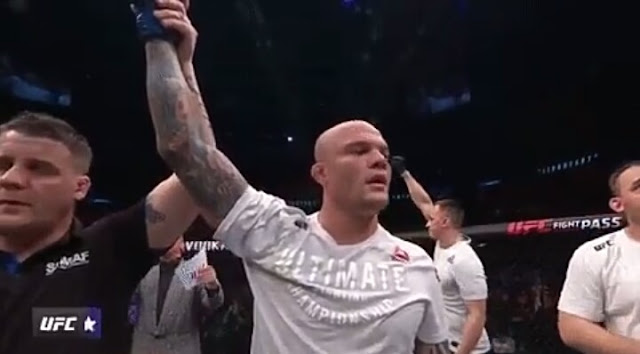 Anthony Smith, ones again proved he is a contender at 205 pounds with a career ending victory over three time title challenger Alexander Gustafsson in the main event of UFC Stockholm at Ericsson Globe on Saturday.

The fight wasn’t so spectacular in the first two rounds, Gustafsson picking his shots from distance with leg kicks, while Smith had the greater success with left hooks while also mixing in uppercuts and a winging right hand.

The third round was a back and fourth affair with both fighters exchanging shots through majority of the round and just as the round was about to end Gustafsson scored a knockdown that possibly won him the round.

The fourth round was all Smith, as he was able to blocked a takedown and trip attempt from Gustafsson before bullying Gustafsson against the cage. Then landed heavy shots on Gustafsson, that he was sent to the canvas, giving him opportunity for a ground and pound, then switched to a rear-naked choke to end the fight at 2:38 mark of round four  .

Another massive win for ‘Lionheart’ as he makes Gustafsson tap in the fourth round 🦁 pic.twitter.com/cZBiXptu6u