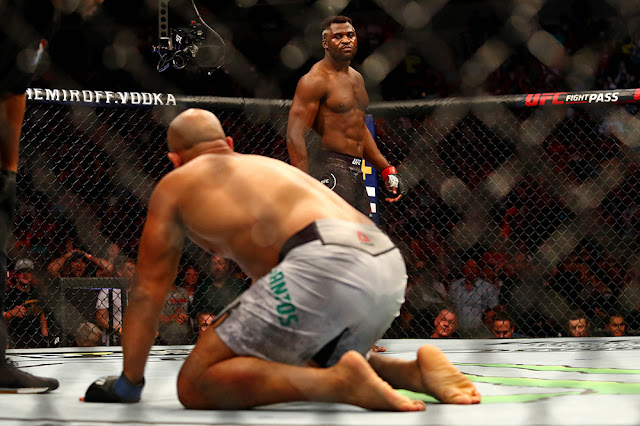 Francis Ngannou lived up to his reputation, by knocking out the former World champion Junior dos Santos in 71 seconds, his third straight first round stoppage.

The fight ended almost immediately, as it started. Both fighters opened the round with kicks and that continued till dos Santos came into Ngannou’s boxing reach which spelled the end.

“Junior moves a lot so the goal was to slow him down, make him not move a lot and then strike,” Ngannou said after the win. “Of course it gives me some confidence but before that, I was already confident. Because Junior is a striker, he is a boxer and I believe I’m the best boxer in this division.”

Junior dos Santos made clear, he was willing to trade with Ngannou and at one point, it sounded like a good idea but when Ngannou started unleashing his heavy punches the fight ended.

Ngannou landed a a big right hand that sent Santos down to the canvas and followed him down unloading huge blows on the defenseless Santos till the referee had no choice but to jump in to stop the bout.

Ngannou is hoping the UFC will land him a title shot against the Winner of Cormier – Miocic, which will take place in August.