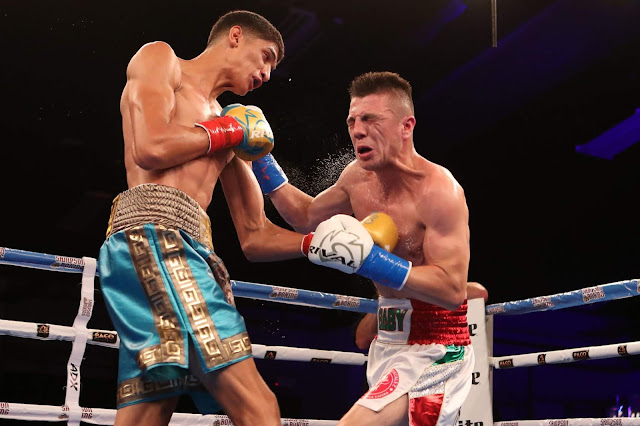 Sebastian Fundora, who owns a 6-feet-5½  height and probably the tallest in the 154 pound division, added another stoppage victory to his resume, Stopping Hector Zepeda in the fourth.

Fundora, who improved to 13-0 (9 KOs), controlled the fight all through the four rounds and this prompted Zepeda’s trainer to tell referee Mark Nelson to stop their scheduled 10-round bout before the fifth round. Handing him a technical knockout victory.

Zepeda (17-1, 4 KOs) was on the losing side for the first time in his professional career. He actually really had nothing to trouble Fundora with, got his head snapped back in the first round with a first straight hand.

Zepeda had trouble landing on the rangy Fundora and ended up getting wobbled by him early in the second round. He was taking a punishment and his corner got concerned.

The third round was more of the same though Zepeda was able to land a good combination. This only made Fundora smile and continue his uninterrupted dominance.

Fundora got Zepeda off balance with a straight left early in the fourth and after the end of the round  Zepeda’s trainer ended the fight because his fighter wasn’t fighting well.
Fundora-zepeda was the main event of “Shobox : The New Generation” triple Header at Winnavegas Casino Resort in Sloan Iowa.