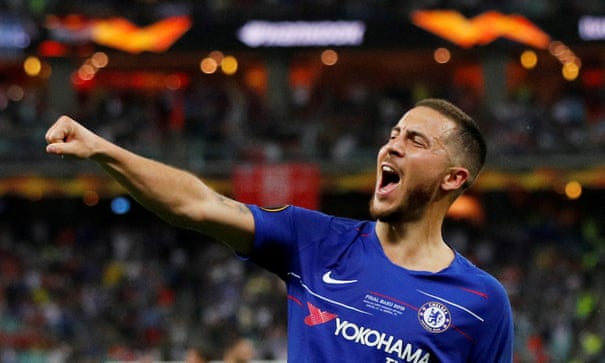 Real Madrid has confirmed the signing of Eden Hazard from Chelsea on a five year deal that could reportedly rise to a club-record transfer of £130m once all bonus payments come into play.

The Belgian still had a year left on his contract with English giants Chelsea before Real Madrid seeker for his signature. This move comes after the 28 year old helped Chelsea FC with two goals, as they defeated Arsenal to win the Europa League trophy.

“Although it is with sadness we say goodbye to Eden and we made it absolutely clear to him the club wished him to stay, we respect the decision he has made to take on a new challenge in a different country and follow his childhood dream of playing for Real Madrid.

“The memories he leaves us with will not fade. He provided all who watched Chelsea play with great entertainment and many match-winning contributions, and for that we thank Eden enormously.
“He has been a model professional throughout his time at the club, a wonderful individual to have around and a joy to work with.

“We look forward to welcoming him back to Stamford Bridge in the future.”

Hazard , who joined Joined a £32m went on to feature 352 times for Chelsea, scoring 110 goals with six major Trophies during his time at Chelsea  This includes two Premier League titles, two Europa Leagues, the FA Cup and League Cup.