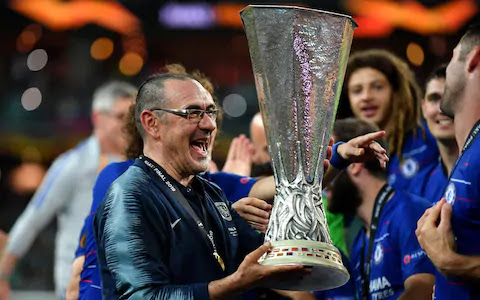 Maurizio Sarri will be leaving Chelsea FC for Italian Giants Juventus, accoracco to an announcement by the English Club.

Sarri will be replacing Massimiliano Allegri at Juventus on a three year deal. This coming,  after airing out his desire to return to Italy following his Europa League triumph with the Club.

Derby County boss Frank Lampard is reportedly Chelsea’s top target for Sarri’s replacement however, Lampard is also in talks with the Championship team for a possible contract extension.

Sarri will be leaving Stanford Bridge after one just a season in London. Their Europa League triumph was his first major trophy as a manager and he also returned Chelsea to UEFA Champions League contention.

According to club director Marina Granovskaia, the club couldn’t stop the Italian from going back to his home country, as he was so eager to return in order to unite with his elderly parents.
“In talks we had following the Europa League final, Maurizio made it clear how strongly he desired to return to his native country, explaining that his reasons for wanting to return to work in Italy were significant,” she said.“He also believed it important to be nearer his family, and for the well-being of his elderly parents he felt he needed to live closer to them at this point.“Maurizio leaves Chelsea with thanks from us all for the work he and his assistants did during the season he spent as our head coach, and for winning the Europa League, guiding us to another cup final and a third-place finish in the Premier League.“We would also like to congratulate him on securing the role as big as any in Serie A and to wish him the best of luck for the future.”