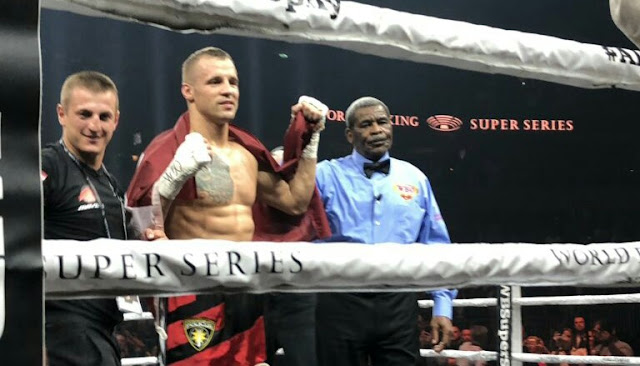 Mairis Briedis (26-1, 19 KOs) made it the WBSS Cruiserweight final with a violent third round knock out of Krzysztof Glowacki (31-2, 19 KOs), thereby capturing the WBO cruiserweight world title.

The knockout win sets him up with the new IBF champion Yunier Dorticos in the WBSS Cruiserweight final. Dorticos knocked out Andrew Tabiti in the other semi final bout earlier in the night.

The second round was wild and Brieidis was deducted a point for an elbow, but was able to score a crucial knock down and another in a controversial moment, when Robert Byrd allowed the fight to continue after the second round bell was sounded.

Early in the third round, both fighters continued to the trading of shots but it didn’t last long, as Briedis dropped dropped Glowacki face first and the fight was stopped.

[…] Breidis has always performed at his peak at against Mike Perez, Oleksandr Usyk, Krzysztof Glowacki and against Mann was no different for Breidis, who was a 50- 1 favourite to defeat Mann ahead of the event. […]