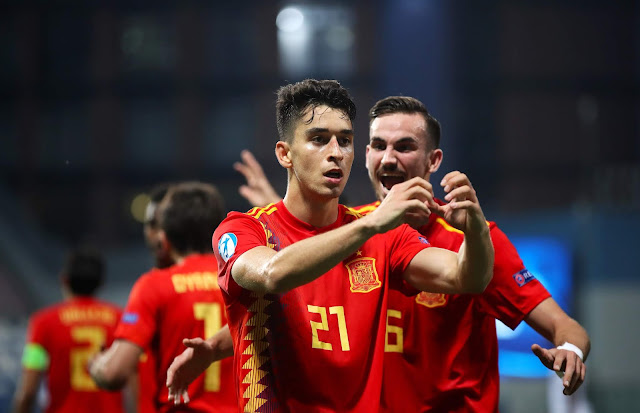 Key Moments Recap :
Goal : 16′ 0 – 1 (pen.) Jean-Philippe Mateta
Cool. As. You. Like.
The striker rolls one to the goalkeeper’s right. Spain have turned this one around

Goal : 28′ Marc Roca 1 – 1
Not the prettiest but Spain won’t care. Bernardoni had denied Olmo with a fine save moment ago but Spain keep the pressure on and score from a corner. Roca gets the wrong side of Toure and heads one at goal from six-yards. Bernardoni gets down to make the save but Roca follows in and smashes home from close range. I thought France were supposed to be watertight at the back? Not on this showing. Game on!

Goal : 45′ Mikel Oyarzabal (pen.) 2 – 1
Composed penalty from the young man. He sends Sivera the wrong way. France are a notoriously difficult side to peg back once in front. Pressure on Spain.

Goal : 66′ Borja Mayoral 4 – 1
Spain are putting on a show now. France look disinterested. Great goal this one.
Fornals whips a ball into the middle with the outside of his right foot and Mayoral is waiting at the back post to smash a half-volley back where it came from. Straight into the top corner.