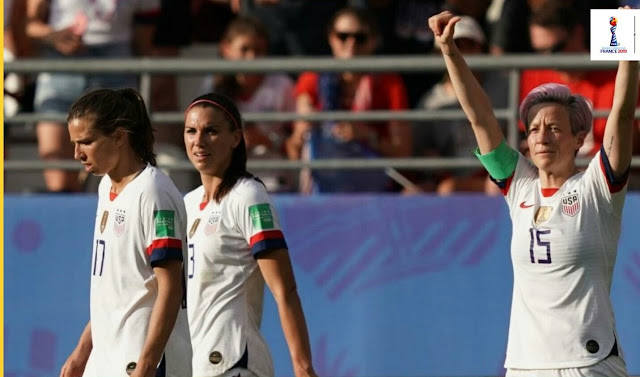 Key Moments Recap :
Goal : 7′ 0 – 1 (pen.) Megan Rapinoe
Tobin Heath controls a long ball forward, cuts inside into the box and touches it past Mapi Leon, who brings her down. Definite penalty.
The United States lead.
Captain Megan Rapinoe steps up to take the penalty and sends Sandra Panos the wrong way, slotting into the bottom left corner. Perfect kick.

Goal : 9′ Jennifer Hermoso 1 – 1
Oh hello. A USA howler and Spain are level.
US goalkeeper Alyssa Naeher plays a short pass out to Becky Sauerbrunn. She’s not alert enough though and Lucia Garcia takes the ball off her feet before feeding Jenni Hermoso.
Naeher is off her line and Hermoso makes no mistake from 20 yards out.

Goal : 76′ 1 – 2 (pen.) Megan Rapinoe
Penalty to the USA. Rose Lavelle touches the ball past Virginia Torrecilla, gets a nudge on the shin and goes down.

VAR check. Of course it is. Three Spain players stand in front of Alex Morgan to stop her taking it.

Five minutes after the penalty was awarded, the United States score it.
Megan Rapinoe goes the same way she did in the first half. This time the keeper goes the right way, but she can’t keep it out.