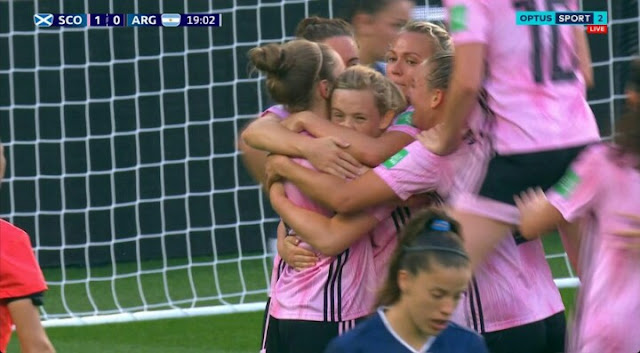 Key Moments Recap :
Goal : 19′ Kim Little 1 – 0
After that scare, Scotland take the lead for the first time at the World Cup!
Erin Cuthbert drives into the penalty and hammers in a shot full of venom. Goalkeeper Vanina Correa does well to save but Cuthbert is alive to the rebound and hooks the ball across the face of goal for the stretching Kim Little to prod in from six yards.

Goal : 49′ Jenny Beattie 2 – 0
Oh yes! A Caroline Weir corner is not the best but when the ball is worked back to her the Manchester City midfielder whips in a wonderful cross and there is Jen Beattie to nod home from close range.
That moves Scotland on to a level goal difference, which could be crucial, although a goal or two more would be most welcome.

Goal : 74′ 3 – 1 Milagros Menendez
Caroline Weir pings in the corner and Leanne Crichton powers in a strong header that is tipped on to the post by Vanina Correa. The ball falls to Erin Cuthbert and her smile is as wide as the Clyde as she pops it home from close range.
Last 16 here we come? Surely?

Goal : 3 – 1 Milagros Menendez
Uh-oh. A mix up in central defence and Argentina have a goal back, with substitute Milagros Menendez keeping a cool head to slide a shot past the advancing Lee Alexander.
Every goal is crucial here, remember, with the four best third-placed teams not settled until tomorrow’s games are finished.

Goal : 79′ 3 – 2 Florencia Bonsegundo
What is going on? Again, Argentina score out of nothing as Florencia Bonsegundo hammers in a shot from distance and it goes in off the underside of the crossbar, with Lee Alexander getting a touch along the way.
She should probably be keeping that out.

Goal : 90′ 3 – 3 (pen.) Florencia Bonsegundo
Sophie Howard, just on the park, slides in and sends her opponent Aldana Cometti tumbling. VAR surely… It doesn’t look good for Scotland. The referee is coming to the side of the pitch to have a look at the replays. This is unbearable!

What the what now? VAR orders a retake. Lee Alexander had both feet of the line as she pulled off that save.