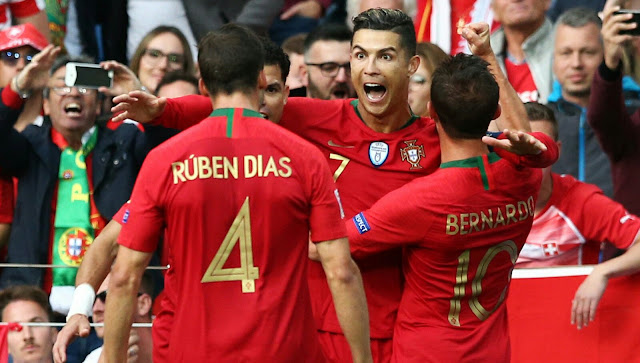 Key Moments Recap :
Goal : 25′ Cristiano Ronaldo 1 – 0
Wow. Ronaldo looks to pile drive his way through Switzerland after a fine bit of skill to get past Xhaka.
Mbabu comes FLYING in to tackle, wins the ball, but also gets the man. In 2019, that’s a foul, right on the edge of the box too.
Ronaldo, of course, stepping up. Crowd on their feet.

ONLY ONE RESULT!
Ronaldo steps up, 20 to 25 yards out, and it has completely done Sommer like a kipper, going into the bottom right corner, to the goalkeeper’s left.
Superb free-kick, and his trademark celebration to boot.

Cristiano Ronaldo fires in a free-kick to end his 4-match scoreless streak with Portugal! pic.twitter.com/0pdmHdS6qu

Goal : 57′ 1 – 1 (pen.) Ricardo Rodriguez
Bernardo Silva is clipped by Schar, clear penalty and it’s given. However, the officials MUST look at the Swiss penalty appeal incident first!
He’s going to the pitchside screen!

Rodriguez steps up, Rui Patricio gets a hand to it, but it creeps into the bottom left corner! Switzerland level in the most dramatic and controversial fashion!
Do we love VAR? I think we do, you know.

Goal : 88′ Cristiano Ronaldo 2 – 1
Who else?! The hallmark of a true great. From nothing, Ronaldo puts Portugal ahead, and all but through to the Nations League final on home soil.
Bernardo latches onto a long ball on the right, pulls it back for Ronaldo, 15 yards out, and he decides to hit it first time.
And hit it he does. Superb effort into the bottom right corner!

Goal : 90′ Cristiano Ronaldo 3 – 1
HAT-TRICK FOR RONALDO! WHEN WILL THIS MAN EVER STOP PERFORMING HEROICS?!
Xhaka loses the ball in midfield, Guedes gallops forward and offloads to Ronaldo on the edge of the box. He cuts inside Akanji and finds the far corner brilliantly!
What a performance in the last few minutes out of NOWHERE from Ronaldo.

Man Of The Match : Cristiano Ronaldo

Portugal lead a tough group consisting of Italy and Poland. They will definitely draw inspiration from their Euro 2016 triumph.

Both teams have met 22 times in the past with Switzerland triumph 10 times, Portugal 7 times with 5 draws. However, Portugal triumphed over Switzerland initheir last meeting, defeating them 2 – 0 in the World Cup group-stage qualifier.