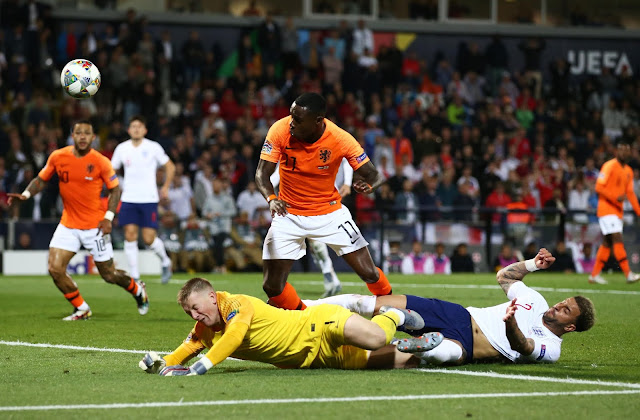 Key Moments Recap :
Goal : 32′ 0 – 1 (pen.) Marcus Rashford
There’s a long wait and a long run-up, but it is coolness personified from Rashford as he sends Cillessen the wrong way.
England are ahead in the Nations League semi-finals
Goal : 73′ Matthijs de Ligt 1 – 1
You can’t say that hasn’t been coming and De Ligt makes up for his earlier mistake with the equaliser!
The corner is delivered by Depay and De Ligt gets above Stones and Walker to emphatically head the ball home.
Game on! We will have extra time and penalties with a draw at 90 minutes.
VAR Rules Out Lingard’s Goal
Lingard has the ball in the net but it’s going to VAR… It’s disallowed for offside!
The Man Utd man is just – JUST – ahead of the defenders and after a few minutes of deliberation, the goal is disallowed.
From ecstacy to agony for England fans and we are back to 1-1.
Goal : 97′ Kyle Walker 2 – 1
Oh no… It’s poor from Stones and a hammer blow for England.
Stones is being closed down by Depay over on the right and rather than play it back neatly to his goalkeeper, he tries to find another outfield player and Depay catches him out to run on goal.
His shot is wonderfully saved by Pickford, but Promes comes driving in along with Walker. Promes’ effort looks to be going wide but it takes a deflection off Walker’s heel to send it goalwards, giving the defender the unwanted own goal plaudits.

Goal : 114′ Quincy Promes 3 – 1
It’s another England error and another Netherlands goal.
Barkley’s woeful pass, intended for Pickford, is latched on to by Depay. He drags the goalkeeper out from his line before cutting the ball back for Promes who scores into an empty net.
England have fallen apart in extra time.

Preview
England and Netherlands will battle for the final spot of the UEFA Nations League final at the Estadio D. Alfonso Henriques to set up a tie with the hosts Portugal, who defeated Switzerland 3 – 1, few hours ago.

Gareth Southgate has in the past impressed with his selections, which has during the qualification earned the Three Lions victories over Spain and Croatia. However, seven of his key players were Involved in the Champions League Final.

Harry Kane, Dele Alli, Danny Rose and Eric Dier could still be left with psychological issues following the defeat, while Jordan Henderson, Trent Alexander-Arnold and Joe Gomez will be fine.

Netherlands will also have those issues, as key players Virgil van Dijk and Georginio Wijnaldum also got involved in the final, which will also play a key role in the selection.