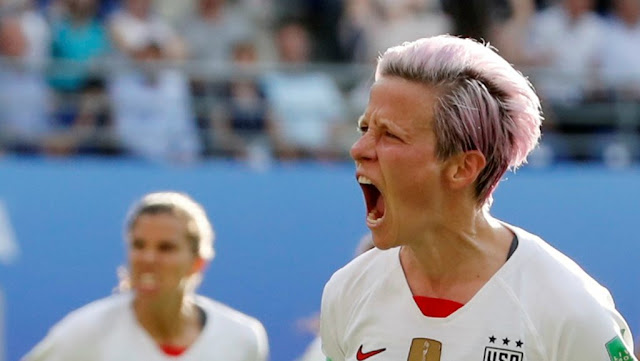 FIFA Women’s World Cup Host France Take on USA in the Quarter Final of the Competition at the Parc de Princes. Scroll down for Live Update, Goals Recap and Highlights of the game

Goal : 5′ 0 – 1 Megan Rapinoe
It was worth the wait!
Megan Rapinoe whips in this free-kick from the wing. Julie Ertz swings for it and misses, and it goes through the legs of France captain Amandine Henry with goalkeeper Sarah Bouhaddi blindsided – and flies into the back of the net.

Goal : 65′ 0 – 2 Megan Rapinoe
The USA have been on the ropes for the past 10 or 15 minutes. They come forward once and score.
Wendie Renard lets Tobin Heath run down the right onto Alex Morgan’s pass. The winger’s cross goes past Sam Mewis in the centre and there is Megan Rapinoe to slam home her fifth goal of this World Cup.

Goal : 81′ Wendie Renard 1 – 2
BONJOUR. France are back in this.
For some reason the USA defenders give Wendie Renard, a real aerial threat, space in the box six yards out to head home a Gaetane Thiney cross, which gives the keeper no chance.