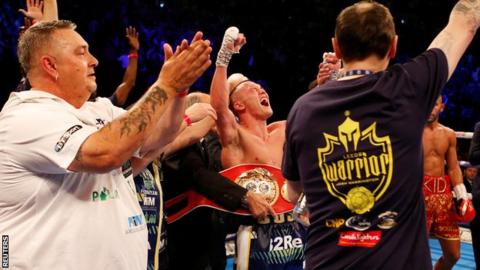 The fight was so close and hard to score. Leaving the champion a very frustrating night defending his title. Galahad settled in early using a southpaw stance, landing a some good lefts and trying to clinch each time Warrington was the aggressor. He was warned by the referef for using his head.

Galahad wzs landing well in round 2, scored a good body shots and was warned again for his holding. Warrington began having progress in the third , got himself into his usual aggressive stance.

Galahad made the champion bleed, leaving the previously cheering home town fans quiet. In the fifth, Galahad dominated and did his best to keep Warrington at bay times he was caught with slashing left-right
Galahad frustrated the champion a proved too hard to hit in the sixth, fighting in a southpaw stance. Warrington got himself struggling to free himself from Galahad’s clinching  each time he got close.
After the fight the champion was relieved

“I knew it were close but I thought I was doing the cleaner work,” said a relieved Warrington. “You can’t come in the champion’s backyard and win by pot-shotting singles. I’ve got to give him credit, he was pretty clever with some of the stuff he did inside. It was probably one of the most tense I’ve been for a fight, the talk of going to the States and unifying, I put pressure on myself. I got carried away with it all myself.”