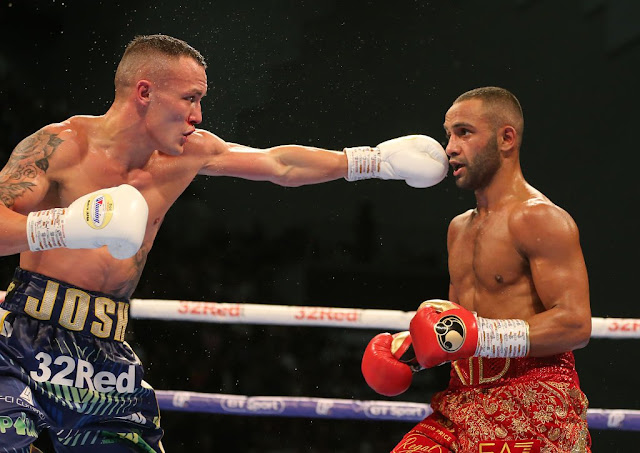 Josh Warrington was able to retain his IBF featherweight title with a close split decision points win over Kid Galahad on Saturday evening and now changes his focus to WBA Featherweight chamoion Leo Santa Cruz, despite speculations of a possible Rematch.

Warrington, has only fought ones outside the UK made clear he was ready to face Leo Santa Cruz “anywhere in the States”.

Speaking to BBC Radio 5 Warrington said : “It’s not that I want to avoid Kid Galahad, it’s that I want to go and test myself against the very best, and I thought I deserved that right after I beat Lee Selby to become world champion.

“I could have said ‘give me a steady defence’. I’d have been well within my rights and no-one would have argued, but I went straight into the fight with Carl Frampton and beat him.”

Carl Frampton was the man in the division after inflicting on Leo Santa Cruz, the only loss in his professional career. Warrington became the man after defeating framoton in thrir fight in December and still maintains he is still open for a Rematch.

“I’ve said that I would love to give Carl a rematch, if he wins a world title, because we had such a good, entertaining fight before,” he said. “But it’s not about that, I want to keep climbing the ladder.

“You’ve got to aim for the top of the tree and I’m hungry to do that. Santa Cruz has the biggest profile and is ranked number one. If you beat him you’re the main man of the division so that’s the one.”