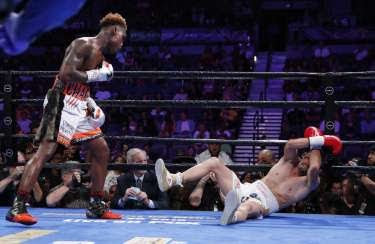 Former WBC 154-pound champion knocked dropped Jorge Cota twice and viciously knocked him out in the third round of the their scheduled 12-round main event of a “FOX PBC Fight Night” broadcast from Mandalay Bay Events Center in Las Vegas.

Charlo was supposed to fight the WBC Super Welterweight champion Tony Harrison in the immediate rematch of the December fight. Harrison carried out a major upset on Charlo carting away the title via unanimous decision.

“I wanna give a thank you and a congratulations to Jorge Cota,” Charlo said. “Even though he took the defeat, he still stepped in the ring. You know, the guy that [has] the title backed out the fight, and he was the one who stepped in the ring as fast as he did.”

Cota came into the fight on the back of a loss via split decision to the Dominican Republic’s Jeison Rosario (19-1-1, 13 KOs) and this was his second fight in nine weeks.

Cota took the first round, according to the scorecards but this was just and only the first round, as Charlo soon found a way to beat the southpaw and will now set sights on the rescheduling of the rematch with Harrison.