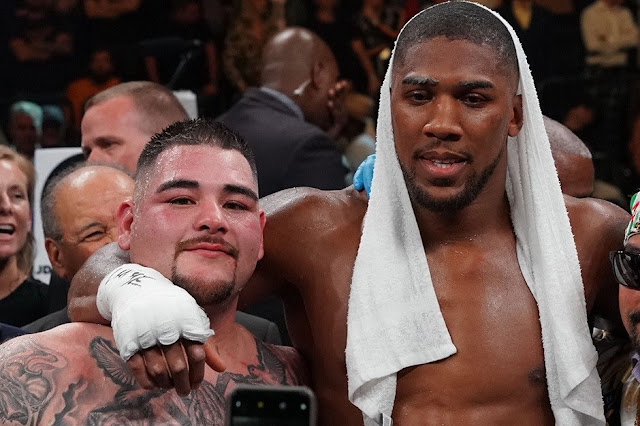 Eddie Hearn has confirmed the triggering of the Rematch clause on the Anthony Joshua Vs Andy Ruiz Jr contract, which will now be set for a November or December date.

Anthony Joshua got humiliated by Andy Ruiz Jr in his US debut, knocked down four times en route to a seventh round knockout loss that ended with all his world titles getting ripped off his shoulders at Madison Square Garden in New York.

After the knockout loss, his promoter Eddie Hearn made clear Joshua will be activating the rematch clause on the fight contract, which will give the Brit a chance to regain his titles.

Today, Hearn confirmed through a tweet that Joshua has successfully triggered the rematch clause after a meeting with the Joshua’s team and management.

After meetings with AJ, Rob Mc and the management team in NY, we have today triggered the contracted rematch clause with Andy Ruiz Jnr. The fight will take place in Nov/Dec at a venue to be confirmed shortly.

Andy Ruis Jr. has also voiced after the fight, he will love the Rematch in his hometown “Mexico”.

“I’d love to do the rematch but first I’ve got to talk to my team, we’ll go from there and figure things out,” ‘The Destroyer’ said.
“I’d love to be in Mexico, there’s never been a heavyweight champion in Mexico so I’d love to have a rematch there.
“I’m still pinching myself that this is true, all that hard work and dedication, I’ve made my dreams come true. We’ve been working for this my whole life, it’s overwhelming and I’m just excited.”