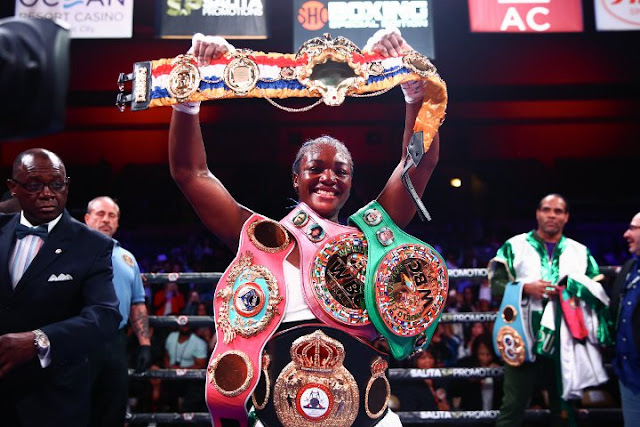 Undisputed middleweight champion Claressa Shields is taking a step towards cementing herself as the greatest female Boxer to ever grace the planet.

She intends to become a three division champion when she steps into the ring against former welterweight titlist Ivana Habazin for the vacant WBO junior middleweight titit on August 17 in Shields’ hometown of Flint, Mich.

“Having the opportunity to become world champion in a third weight division faster than any man or woman in boxing history will make August 17 a night I will cherish forever,” notes Shields, the only American boxer in history to capture back-to-back Olympic Gold medals. “It’s another big step forward in lifting women’s boxing on the road to equality.”

Croatia’s Habazin (20-3, 7KOs) will be hoping to become a two division champion, previously holding a title at Welterweight. She lost her title to unbeaten pound-for-pound and Undisputed Welterweight Champion Cecilia Braekhus back in Sept. 2014.

“I’m honored to fight on SHOWTIME and to be making my debut in the U.S.,” said Habazin. “It’s a dream come true and this is a huge chance for me to prove that I am one of boxing’s elite fighters. I will not let this opportunity pass. I’m not just coming to the U.S. to fight, I’m coming for victory.

“I’m actually a big fan of Claressa. She made history for women’s boxing and will be a great opponent for me. She’s very confident in herself, she’s aggressive, she can move, she has speed and good defense. But I have all of this too, and I can punch. I can’t wait to see what she is made of. They said her fight against Hammer was the biggest of all time, but I think this one will be the greatest ever.”