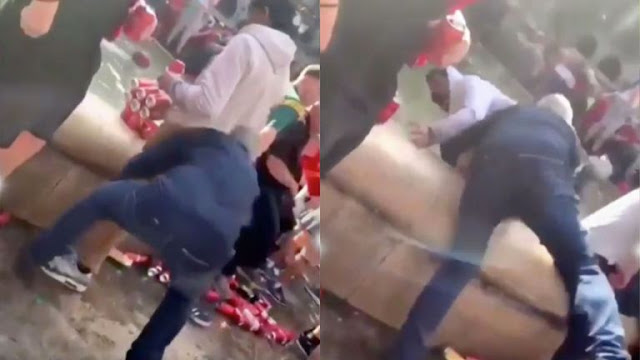 Liverpool FC Fans have been involved in a racial abuse incident that has forced the Club into working with the police in Barcelona to identify and make arrest of those involved.

A viral short footage surfaced on the internet earlier today, appearing to show people being pushed into a fountain by a group of Liverpool FC fans with some other fan directing a racial slur at some passersby. The fans had gathered at the Placa Reial square on Tuesday, ahead of the Liverpool’s Champions League semi-final first leg against Barcelona at the Nou Camp.

Assaulting an innocent old man then racially abusing him.

Merseyside Police, who have been sent to compliment the Police presence in Barcelona are now working with the local authorities to identify the perpetrators of the act but so far, no arrest have been made in relation to the incident.

However, Liverpool have released a statement condemning the behavior calling it “unacceptable” and promised to bring the perpetrators to justice.

“Such behaviour is clearly totally unacceptable and will not be tolerated,” Liverpool said in a statement.

“It would be inappropriate to comment further while the situation is ongoing other than to confirm the club will follow due process in any and all cases of this nature.”

can act on incidents using British Law and we will take action”.

“This type of behaviour is wholly unacceptable and I want to remind fans who are travelling with tickets to monitor official fan advice on the club’s official website and social media feeds for information to assist their visit. Given the vigilance of police and security around the stadium, we would encourage fans to arrive in plenty of time.”