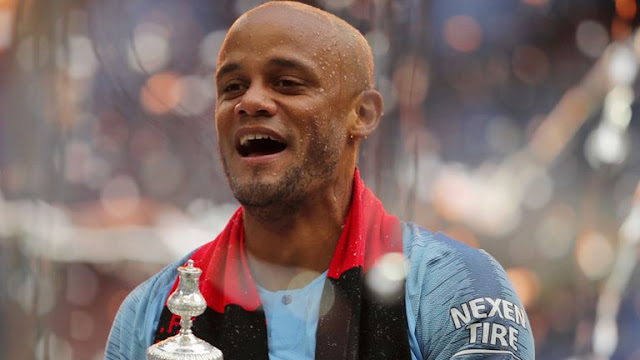 Vincent Kompany confirmed his departure from Manchester City and will be taking up a role a Anderlecht, where he will perform the role of a player Manager.

Kompany has signed a three year deal with Belgian side Anderlecht, a club that played a significant role in his growth through the ranks. He left Anderlecht in 2006 to join German sides Hamburg.

Vincent Kompany announced his departure on Sunday, a day after leading City to a 6 – 0  win over Watford in the FA Cup Final. The Win which also made City, the first to secure a domestic treble.

“I have decided to take up the challenge at RSC Anderlecht. Player-Manager.
“I want to share my knowledge with the next purple generations. With that, I will also put a bit of Manchester in the heart of Belgium.
“This may come as a surprise to you. It’s the most passionate yet rational decision I’ve ever made.
“As a footballer, I was born and raised at RSC Anderlecht. Since the age of 6, I have been one with that club. A history of 34 league titles, they are second to none.”

Kompany also confirmed he had a meeting with Anderlecht owner Marc Coucke and sports director Michael Verschueren, when training on their pitch during International duty with Belgium last year.

He also acknowledged Manchester City Pep Guardiola for the thing he learned and also admits really loves the way City play. He will love to teach Players to play that way.

“Mr. Coucke, the owner, pledged full support: time, budget, framework, staff, facilities. I was left not only impressed, but also intrigued by this sign of confidence in me.
“It got me thinking. The end of this season couldn’t be more memorable. I have lived the dream here. I have learned so much the last 3 years. From an incredible manager. Pep Guardiola reignited my love for the game. I’ve witnessed, participated, analysed, absorbed, studied.
“Man City play the football I want to play. It is the football I want to teach and to see played.”

Vincent Kompany made 360 appearances for City since joining from Hamburg in 2008 and has won four Premier League titles, two FA Cups and four League Cups along the way. Which includes each of them this season.

The City captain also commented on his departure and how it has always seemed so close in recent years and dropped some appreciation for Manchester City Fans.

“We’ve just seen the close of an incredible season. My 11th as a Blue. I cannot believe I’m writing this but … also my last as a Blue.

“Countless of times have I imagined this day, after all, the end has felt nearby for so many years. It still doesn’t feel real. Man City has given me everything. As overwhelming as it is, the time has come for me to go. And what a season to bow out. I feel nothing but gratefulness. I am grateful to all those who supported me on a special journey, at a very special club.

“I remember the first day, as clear as I see the last. I remember the boundless kindness I received from the people of Manchester. I will never forget how all Man City supporters remained loyal to me in good times and especially bad times. Against the odds you have always backed me and inspired me to never give up.

“Sheikh Mansour changed my life and that of all the City fans around the world, for that I am forever grateful. A blue nation has arisen and challenged the established order of things, I find that awesome. I cherish the counsel and leadership of a good human being, Khaldoon Al Mubarak. Man City could not be in better hands.”

Kompany made 103 appearances for Anderlecht before moving to Hamburg and within that period helped the Belgian side to two domestic League titles.

Anderlecht have not been so dominant in the last 5 yearsy they have won just one title in the last five years and have not won the Belgian Cup for 11 seasons.