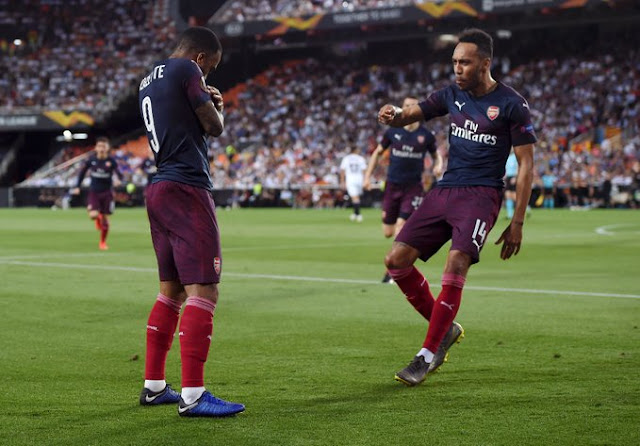 GOAL  : 11′ Kevin Gameiro 1 – 0
The Mestalla erupts, and it’s from a fine counter attacking move!
Maitland-Niles sees a cross-shot saved by Neto at one end, and Valencia break at pace. Maitland-Niles is out of position, Torreira doesn’t get across, and Rodrigo can centre from the left across the face of goal for Gameiro.

It takes a little deflection into Gameiro’s path at the far post, and he makes no mistake from close range.

GOAL : 17′ 1 – 1 Pierre-Emerick Auba…
What is happening?! It’s Arsenal’s first attack and they’ve got a huge, huge goal!
It’s a simple long punt from Cech, Gabriel’s header is poor, allowing Lacazette to nod a header onto his partner Aubameyang.

18 yards out, Aubameyang lets it bounce before firing a superb half volley into the bottom right corner!! What a finish! What a goal for Arsenal!!

GOAL : 50′ 1 – 2 Alexandre Lacazette
After the last two nights, we can’t say that for sure, but Valencia need FOUR goals now.
It’s brilliant from Aubameyang again, winning the ball from Gaya on the floor on the right. Torreira races through with it, feeds Lacazette on the left of the box, and after two touches, he finds the bottom right corner from 15 yards!
Fine finish. It’s Alexandre the great for Arsenal!

Parejo has it on the right, he cuts it back for Rodrigo, who somehow sees his shot hit Gameiro and bundle over the line. Hint of offside, but Monreal played him on.

Goal : 69′ 2 – 3 Pierre-Emerick Auba…
Surely, surely, that’s that.
What a performance from Aubameyang.
Lacazette wins it deep and feeds Maitland-Niles on the right. The pace on the low cross is superb, and Aubameyang gets in front of his man at the near post to sneak it home. Valencia now need four, again!

GOAL : 88′ 2 – 4 Pierre-Emerick Auba…
Wow. What a performance. Arsenal have made it, and Auba has been absolutely incredible.
He plays a one-two with Mkhitaryan, and receives it at an acute angle. But no problem for Auba, he finds the roof of the net with a thumping finish. Oh my.
Hat-trick, and a 10/10 performance. 29 goals for the season.

Man Of The Match :Aubameyang 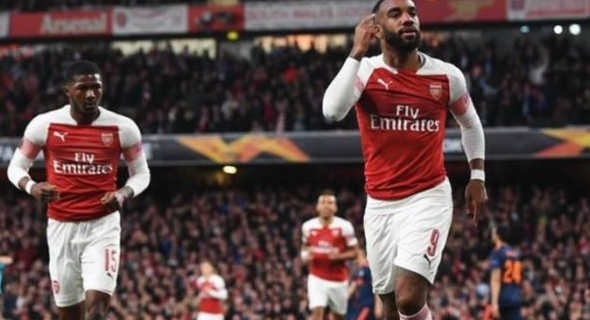