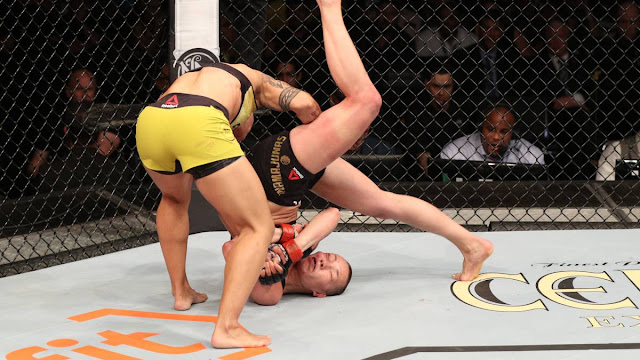 Jessica Andrade defeated Rose Namajunas in the main event of UFC 237, knocking her out with a vicious slam and with that snatched away the UFC Strawweight Title.

Before the slam, Namajunas was dominating the fight with her Jab, bloodied the challenger early in the fight before Andrade took her down and even then Rose attempted a choke that free her up and Andrade started again from square one, eating shots.
Rose dropped Andrade with a knee and dominated the remaining minutes of the round.

Andrade was clearly losing the fight, as she had no success in the second round. She was clearly being picked apart by Rose until that point, where out of nowhere she picked Rose Up slammed her head first on the canvas, knocking her out cold to win the fight.

Jessica Andrade with the SLAM KO OUT OF OF NOWHERE!

You won’t see a crazier finish in a title fight!#AndNew #UFC237 pic.twitter.com/WuTl1OcTQq

SUPERMAN!!@Superman_Spann silences the Rio crowd and puts Lil Nog away in round 1! #UFC237 pic.twitter.com/KjiqceRpD0