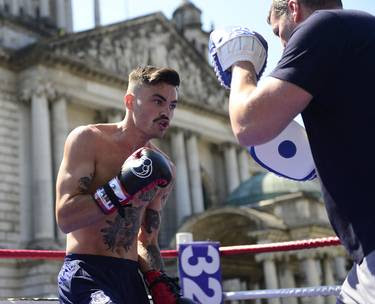 Super lightweight prospect Tyrone McKenna will square off against rival Darragh Foley for the WBC International title in Belfast on June 21. This Fight will be streamed live on ESPN+ in association with top rank.

The all Irish main event will have so much at stake, as the winner will stand a chance of getting a World Rank. McKenna (18-1-1, 6 KOs) will have a hometown advantage in Ulster Hall against Dublin’s ‘Super’ Foley (17-3-1, 9 KOs).
McKenna believes he will “basically” be viewed as the best Super lightweight in Ireland, when he succeeds in defeating Foley and placing emphasis on his abilities, feel Foley won’t be able to stand against his dream of earning a world rank.

“After I beat Foley, basically I’ll be crowned king of Ireland because I’ll have cleaned out the division on the island. Then I’ll be going for Europe, then the world” said Tyrone McKenna.
“This will be a big year for me because I’ll have a ranking with the WBC and then I’ll be set for a massive fight.
“I’m going to be too quick, too smart, too strong for Foley on June 21. There’s no chance with the way I’m training, improving and generally feeling that he can beat me.
“He can train as hard as he wants and talk as much as he wants but there’s not a chance he’s beating me on the night.”

Foley on the other hand, is out to make history and believes that this match up actually represents the best domestic match up between the two cities. He promises fireworks and a big dream of always winning.

“Fans can expect ‘Super’ Foley now – because that was ‘Average’ Foley in my last fight. Now I just want to win, win, win because the pain of losing is still fresh in my mind.
“I always take one fight at a time. All I’m fixated on in Tyrone McKenna. This is the most exciting Belfast vs. Dublin title fight on paper in 20 or 30 years. I’m up for creating history.
“I’ll walk to the middle of the ring and if he does, so be it. However it pans out tactically, I think we’re going to do something incredible in there.”