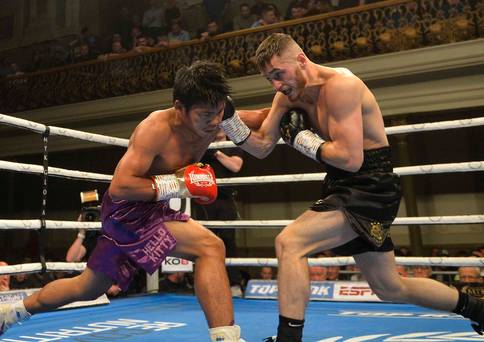 Ryan Burnett returned to the boxing scene with a bang, knocking out Philippines’ Jelbirt Gomera with a body shot within six rounds on Friday evening at Ulster Hall in Belfast, Northern Ireland.

Burnett ended the fight with a hook that left the Filipino wincing for pain but tried to deceive the referee, it was a low blow. This didn’t work for him, as the referee called the fight off at 2:01 of round six.

“I felt a bit rusty in there, it took me a while to get my timing down,” Burnett claimed at the end of his ESPN+ streamed headliner.

Both fighters had their own share of cuts, McCullough bore small cuts under each eye, while he landed enough to cause a streaming cut just over his Geraghty’s left eyelid.

Burnett easily found his way through his opponent, landing his right hands at will  confirming he had fully recovered from his fluke back injury he suffered in a World Boxing Super Series tournament loss to Donaire last November, with an entertaining fight in front of his homhomet fans.

Burnett got settled in the sixth , the fight became onesided and with a good left hook landing just below Gomera’s elbow was enough to send the Filipino to his corner, wincing in pain hopes that the referee mistook the shot for a low blow. That instead made the referee end the fight, granting Burnett a KO victory.

“I think I will be a strong contender for anybody,” Burnett (20-1, 10KOs) said of his debut at super bantamweight. “I wasn’t as strong as I wanted to be at (the weight), but it’s a process. It’s a process I’m willing to learn and work through.”

Nonito Donaire, who ended Burnett’s Reign as a Bantamweight titlist last year, November in the World Boxing Super Series tournament, was ring side and Burnett will sure welcome the ieai of a rematch.

“Donaire is a crafty veteran, I didn’t get to finish my work with him,” Burnett said of his hopes to pick up where his back gave out at the end of the 4th round of their title fight last November. “Belfast would definitely love to see it again and I’d love a rematch.” 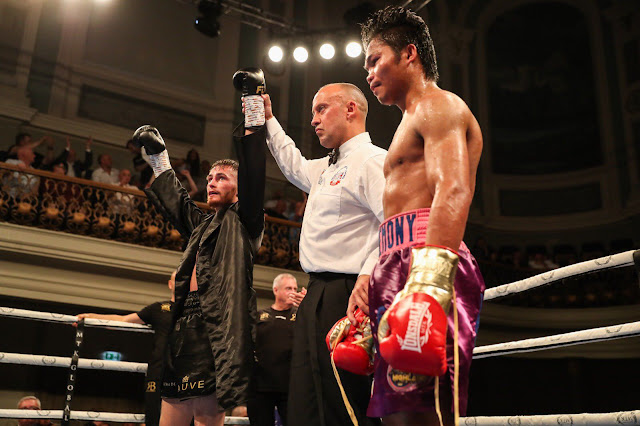