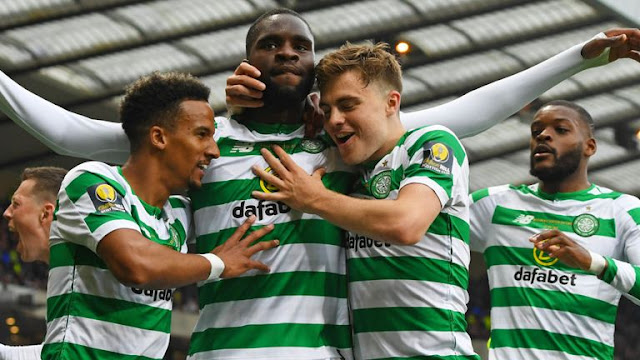 Hearts keep the ball upfield and from a throw-in on the left, work it low into the middle from Hickey to Djoum. He shoots from the edge of the box but it lands straight at Clare’s feet, he backheels it into Edwards’ path, and he shoots through Bains’ legs for the opener.
Amazing stuff – and a HUGE dent in Celtic’s treble hopes here!

Goal : 62′ 1 – 1 (pen.) Odsonne Edouard
Edouard goes for the bottom left and finds it – although Zlamal might be disappointed not to keep it out, guessing the right way and getting a hand to it but not diving quick enough to stop it going under his glove.

Goal : 82′ 1 – 2 Odsonne Edouard
Berra is caught out of position for a second time in half an hour and might have handed the treble treble to Celtic. A header from defence finds a gap in the defence with him ahead of the backline, and his desperate swing at the ball is nowhere near it.
That space allows the ball to reach Edouard, who is clean through on goal and fires high past the onrushing Zlamal to put Celtic in front of the first time.

Celtic will be hoping to crown a very successful domestic season with the Scottish Cup trophy, which completes a clean sweep of domestic trophies. A treble treble.

Hearts on the other hand, are campaigning for their first Cup triumph since 2012.

This Cup is the oldest knockout competition in history and today will be Crowning a new champion at Hampden Park. With both managers under pressure for different reasons, you have to expect something spectacular from both sides .