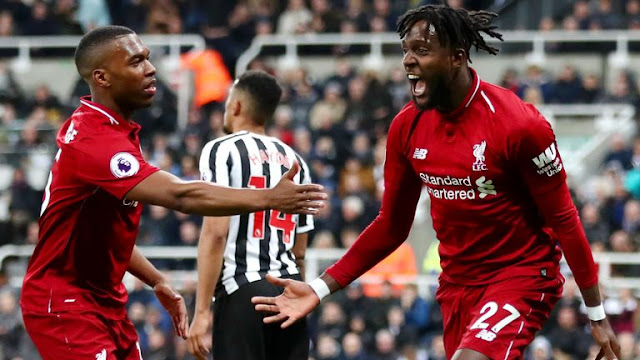 GOAL  : 13′ 0 – 1 Virgil Van Dijk
Oh dear Newcastle. Liverpool have scored more goals from set pieces than anyone else this season, but few have been simpler than this.Alexander-Arnold’s corner is well delivered but the man marking Van Dijk, Lascelles, gets caught up in the melee before falling over.
That allows Liverpool’s man mountain a free header and he leaves Dubravka no chance with a header into the floor and beyond the goalkeeper
GOAL : 20′ Christian Atsu 1 – 1
A weak pass from Lovren gives the hosts the ball back, but Liverpool have plenty of men back and look in little danger. But when Manquillo delivers from the right and Rondon finds himself up against Alexander-Arnold, there’s only one winner.
His nod finds Ritchie, who tries a cross-cum-shot across the six-yard area and Rondon smacks it goalwards. On the line, Alexander-Arnold blocks it – clearly with his arm – but before the referee can blow for a penalty Atsu smacks in the rebound

GOAL : 28′ 1 – 2 Mohamed Salah
Maybe not that great after all? Newcastle concede a second very un-Benitez-like goal as Liverpool restore their lead.
Alexander-Arnold and Henderson exchange passes from a throw-in deep in the opposition half, before the full-back – who’s lucky to still be on the pitch – swings in a beautiful cross for a totally unmarked Salah in the middle.
He takes it first-time with the calmness of a five-a-side kickabout and just strokes the ball past Dubravka on his right and into the far corner.

GOAL : 54′ Salomon Rondon 2 – 2
We’ve got another goal from a corner, but this time it’s just a moment of pure quality which puts Newcastle back level. Liverpool clear Ritchie’s delivery at the near post to the edge of the box, where it deflects into an unmarked Rondon’s path.
He smacks it on his left as Van Dijk sprint towards him, and he finds the bottom corner leaving Alisson helpless.
GOAL : 86′ 2 – 3 Divock Origi
THE TITLE RACE TAKES ANOTHER TURN! Shaqiri delivers a brilliant whipped ball into the middle, and Origi gets above Lascelles in the air – but it’s the Newcastle man who heads the ball beyond Dubravka to restore the visitors’ lead with four minutes to go.
What drama. What tension. What a season

Man Of The Match :Trent Alexander-Arnold