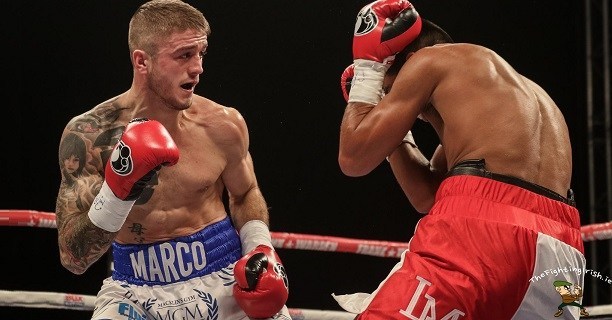 Marco McCullough (22-4, 12KOs) entertained his hometown fans with a 3rd round knockout of Declan Geraghty (18-4, 4KOs) in their regional title fight Friday evening Ulster Hall at in Belfast, Northern Ireland.

The fight ended when McCullough landed a well timed right hand shot flattened Geraghty and couldn’t get back to his feet during the 10 count at 2:28 of round three.

Before the knockout which actually came out of nowhere, the fight was really close with McCullough doing just enough to edge the Dubliner and had some trouble with Geraghty’s southpaw stance.

Both fighters had their own share of cuts, McCullough bore small cuts under each eye, while he landed enough to cause a streaming cut just over his Geraghty’s left eyelid.

McCullough is two years without a loss and is presently on a five fight winning streak, since losing to Ryan Welsh victory via an Eleventh round stoppage.

The fight was the Co-main event to Ryan Burnett’s comeback fight against  Philippines’ Jelbirt Gomera in a scheduled 10-round regional title fight.