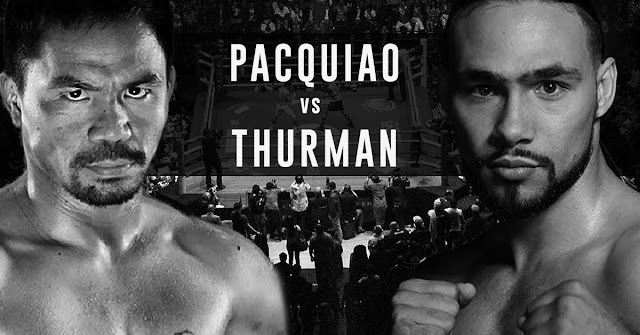 The highly anticipated clash between future
Hall of Famer Manny Pacquiao and Keith Thurman has been announced and is scheduled to July 20. It will be a twelve round welterweight championship FOX Pay-Per-View show, MGM Grand Garden Arena in Las Vegas.

Keith Thurman returned to the boxing scene after a long layoff, caused by an elbow surgery which followed his split decision win over  Danny Garcia (35-2, 21 KOs) in their unification battle in March 2017 at Barclays Center.

Keith Thurman overcame some serious  trouble in the seventh round to defeat Josesito Lopez (36-8, 19 KOs, 1 NC) via Majority decision on January 26 ,at the Barclays Center in Brooklyn.