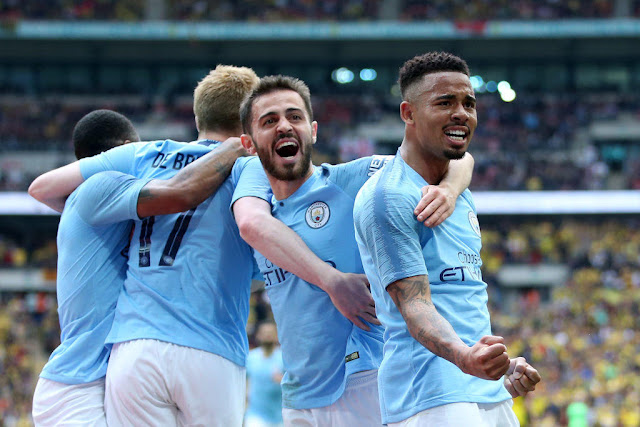 Goal : 26′ David Silva 1 – 0
City break the deadlock.
I’m not sure you would have expected them to take the lead like this as both David Silva and Sterling win headers on the edge of the box. Sterling’s header is aimed towards Silva, who spins away from Femenia and then finishes with a shot into the far corner.

Goal : 38′ Raheem Sterling 2 – 0
This had definitely been coming, and City are in control now
Bernardo Silva curls a sublime pass to the back post for Jesus, who gets between Gomes and Femenia and flicks the ball goalwards.
It’s bouncing into the goal but Sterling cheekily whacks it into the empty net right on the line, and it looks like he will claim it.

Goal : 61′ Kevin De Bruyne 3 – 0
Game over. A third goal for City and a third trophy of the season is now almost within their grasp.
Watford are caught on the break as Pereyra loses out in an aerial battle with Jesus.
Jesus breaks forward and plays inside for De Bruyne, who checks past Gomes and then finishes from close range with only one defender on the line.

Goal : 69′ Gabriel Jesus 4 – 0
Jesus gets his goal.
It’s similar to the third goal as City break from a Watford attack. This time De Bruyne plays through Jesus, who is clear and coolly finishes past Gomes.

Goal : 81′ Raheem Sterling 5 – 0
It’s five for City.
Bernardo Silva decides to step up the pace as he drives forward, skips into the box with a step-over and then fizzes the ball to the back post where Sterling is free to finish past Gomes.
So good from Bernardo Silva against a tiring Watford defence. 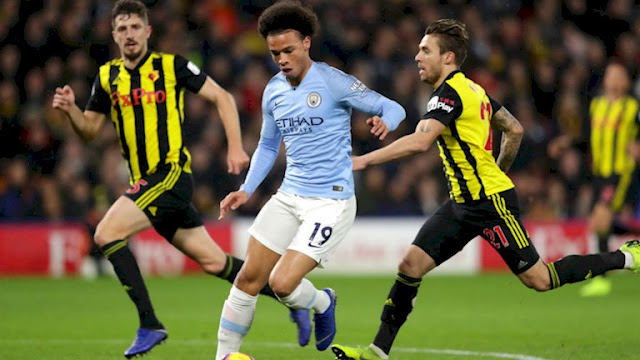