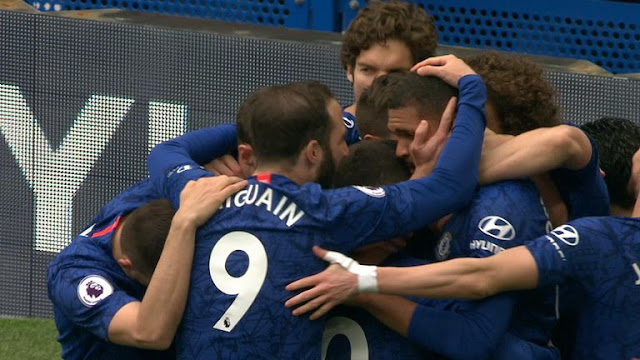 GOAL  : 48′ Ruben Loftus-Cheek 1 – 0
In a blink of a eye, Chelsea are out of sight!!! Amazing how a goal can change the mood. Again, Watford go to sleep. A corner from the right is met powerfully by Luiz – who has been very lethargic up until now – and the ball thumps past Foster.
Chelsea are taking control of the top four race. They’ll be moving above Tottenham if things stay the same.
“It’s happened again, it’s happened again, Tottenham Hotspur – it’s happening again,” sing the home fans.

GOAL : 51′ David Luiz 2 – 0
THAT’LL SETTLE THE NERVES! It’s hardly a deserved lead – but the home fans don’t care. Hazard wins his team a corner with a brilliant bit of individual skill that draws a save out of Foster. Chelsea go short and a looping cross is pounced upon by Loftus-Cheek from close range. An easy headed finish. Javi Gracia can’t believe it on the touchline. So soft.

GOAL : 75′ Gonzalo Higuain 3 – 0
Ruthless from Chelsea. They’ve hardly had the ball for the last 10 minutes but their class in attack shines through. Pedro picks out Higuain in behind Cathcart, who should do better. The striker shows his coolness with a cheeky chipped finish over Foster.

Man Of The Match : Kepa Arrizabalaga