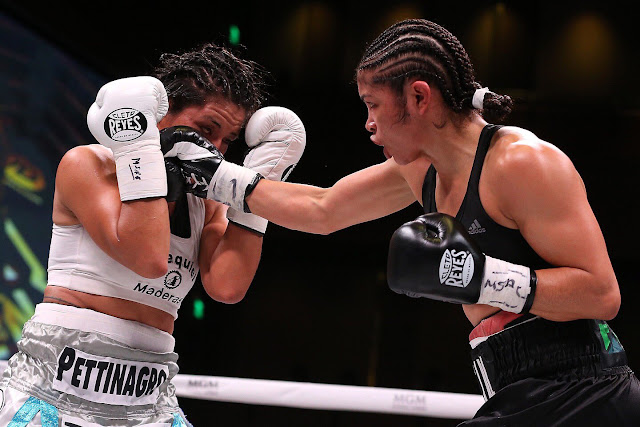 The fight was violent and Sanchez seemed to have advantage in some of the rounds, with both fighters trying their best in every round till Exhaustion settled in the later rounds. Eventually tge

At the late minutes of round nine, Sanchez was left hanging on the ropes and bloodied, drooled cascading to the mat as she bent over after a McCaskill right hand. A knock down that was later ruled as a slip and at that point, there would be many doubting she could make it to the end.

Both fighters emptied their tanks standing toe to toe in the final minutes of the fights . Both fighters refused to be overwhelmed, especially Sanchez who despite being bloodied stayed up punching even after the final bell.

“It was for sure nonstop…Anahi has great accuracy and solid power. She sure wasn’t afraid to fight and mix it up.”

“The scorecards were a little drastic and I don’t like when that happens to me when I go somewhere else so respect to Anahi.” As to the obvious question after such a memorable encounter, McCaskill was cautiously open to a sequel. “I have to talk to (promoter) Eddie Hearn and my manager about that. But like I said, it was a great fight, she is a great fighter and I enjoy a good challenge.”

McCaskill is now 2 – 0 since her loss to current undisputed lightweight champion Katie Taylor in December 2017.  While Sanchez had her two Fight winning streak halted after also losing to Taylor. She expressed her disappointment.

“I don’t think the judges gave me any love on the scorecards. I was getting hit low, I was getting headbutted like but I didn’t get any love from the judges or the referees.” She can take solace in the love received from everyone who saw the fight as she hopes for a return.