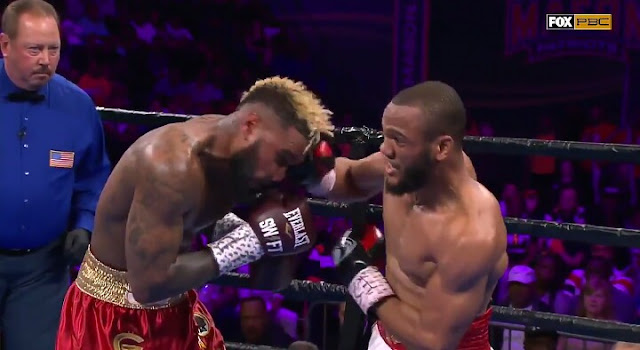 Hurd Is Dropped In Round 2

With RD2 coming to an end @jrockboxing landed a 💥 while Hurd was pinned against the ropes, scoring the first knockdown of the fight. #HurdWilliams #PBConFOX pic.twitter.com/jekBoIG4LH

Mario Barrios KOs. Juan Jose Velasco In Round 2 With A Body Shot

IBF, IBO and WBA “Swift” Jarrett Hurd will defend his titles against Julian “J-Rock” Williams live on Friday night, May 11,  from the EagleBank Arena in Fairfax, Virginia. Live on ITV4.

Julian Williams , Ranked No. 8 by Ring magazine will be having his second shot at a world title. The first ended, a fifth round knockout loss to Jermall Charlo in December 2016.

Hurd returned to the rig in December with a knockout win over Journeyman Jason Welborn in the fourth round. The fight was his first after the surgery to repair a torn rotator cuff.
The fight promises fireworks – Don’t forget to Check Back For The Full Fight Card Results