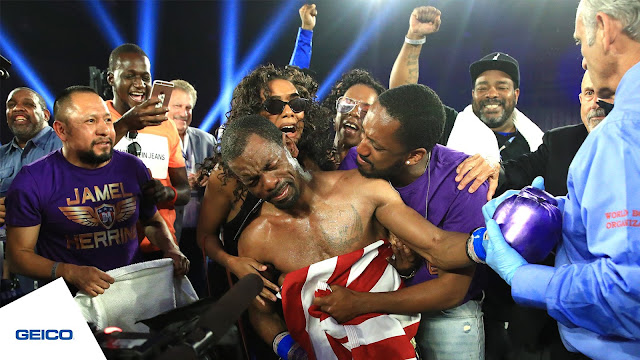 Herring dedicated the win to his late daughter Ariana, who passed away just two months of age and would have been 10 years on Saturday and will now serve two purposes in his life after winning the title.

Both fighters both fought behind the Jab in the first round but Herring connected more with intent and even caught Ito’s attention with a straight left hand midway through the round,which triggered an immediate response from Ito in the second round.

Ito connected more and was more active I the second, while Herring spent much of the frame avoiding the incoming more so than getting off his own punches. It is ended the round on top anf the aggressor.

Due to his dominance in the second round his local and traveling fans drowned ever sound with audible chants of his name “Ito” while the opposing fans tried to keep up with “USA” chants, which became the main attraction and the other interesting thing about round three.

Herring got his weight and body advantage in the fourth, scoring with left hands and also making the champion miss. InI’the fifth round Herring achieved his best round in the fight ending the frame with a series of left hands and a sweeping right hook.

The fight slid off in favour of Ito, who took advantage with right hands to the body, while Herring kept his right hand dangerously connecting..Ito actually was getting the upper hand when the fight became close to a dog fight.

Both fighters battled fatigue in round nine, Herring getting back to his boxing, while Ito fought with his mouth open. In the 10th round Herring connected a right hand to the back of Ito’s head that sent the defending champion to the canvas prompting a stoppage.

Herring viewed the title within reach and doubled up on his jab for good measure, trying his best to avoid Ito, who also had three minutes to do something spectacular in order ti retain his title. This never came till the final bell.

[…] Herring (23-2, 11KOs), who puts his title on the line against Stevenson has held the belt since 2019 and that was after suffering two defeats in three fights and had to link up with head trainer Brian ‘Bomac’ McIntyre to renovate his career. […]

Shakur Stevenson Breaks Down Jamel Herring, Stops Him In The 10th Round – DopeClics

[…] Herring defended the title thrice before making facing Stevenson and at 36 years, this could possibly start an ending sequence to Herring’s Boxing career. However, this is Herrings first loss since shocking Masayuki Ito for the 140 Pound Title […]