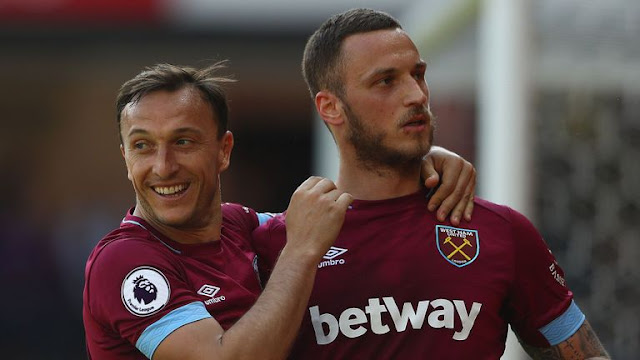 The captain breaks the deadlock! And what a nice goal it is!
A one-two in the middle of the park with Antonio takes him past Capoue, and then, as he approaches the edge of the box, a drop of the shoulder does for Kabasele. Noble then makes no mistake with the finish, slotting home impressively

Goal : 39′ 0 – 2 Manuel Lanzini
Well Watford have had most of the ball but West Ham have made their two chances count!
Antonio collects a fine long pass forwards from Noble and after some rebounds on the edge of the Watford box he lashes a shot goalwards.
Foster does well to parry it onto the underside of the bar but Lanzini had reacted quickest and nods home a simple finish. West Ham in control

Goal : 46′ Gerard Deulofeu 1 – 2
OH WOW! That’s a howler from Zabaleta!
The experienced defender is under pressure out on the right flank and opts to roll a back pass to Fabianski but it’s cut out by Deulofeu and he beats the keeper one-one and tucks into an empty net!

Red Card : Holebas
Antonio is racing through on goal and Holebas has clipped the West Ham man’s legs! On his 100th Premier League appearance he’s off!
Worse for Holebas – that means he misses the FA Cup final!

Goal : 71′ 1 – 3 Marko Arnautovic
Is that game over? Well, we’ve seen some big comebacks this week but Watford have it all to do now…
Zabaleta lofts the ball into the box and Anderson meets it with a fine volley which Foster tips onto the post.
But, just as with Lanzini’s goal, it’s a West Ham player who reacts first and Arnautovic is there to slide in his 10th league goal of the season.

Goal : 78′ 1 – 4 (pen.) Mark Noble
It’s all going wrong for Watford now… Femenia turns in his area, lets it get away from him, doesn’t see Antonio storming through and knocks him to the ground…
Noble to take…
It’s a fine spot-kick from Noble, who sends it into the side-netting.