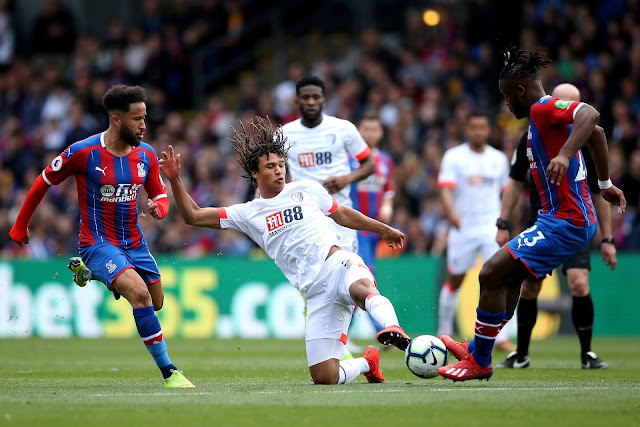 Goal : 24′ Michy Batshuayi 1 – 0
Palace take a deserved lead! Zaha’s cross from the right takes a wicked deflection off Smith and falls into the path of Batshuayi, who leans into Cook, lets the ball fall and volleys it into the net. A fine finish!
That’s five goals in Batshuayi’s last ten games for Palace.

Goal : 32′ Michy Batshuayi 2 – 0
His second of the afternoon! Zaha finds the unmarked Wan-Bissaka on the right flank. He drives a wayward shot which falls into the path of Batshuayi, who slides the ball home!
It’s all looking very comfortable for Palace now!

Goal : 37′ Jack Simpson (o.g.) 3 – 0
An own goal and Palace are three up! Zaha sprints unmarked down the left. He pokes a shot on goal which Travers flaps at, parrying the ball back into the danger zone. It deflects off Simpson and into the net!

Goal : 45′ 3 – 1 Jefferson Lerma
A scorcher from Lerma! What a goal! He picks it up from around 35-yards and fizzes it into the top corner off the crossbar! A phenomenal strike!

Game on! Smith drives forward from left-back, plays a one-two with Fraser before pulling the ball back for Ibe.
He takes a touch before his low shot takes a slight deflection off Ward and nestles into the bottom corner! That’s Ibe’s first Premier League goal this season!

It’s four! Van Aanholt picks the ball up, plays a one-two with Zaha as he surges into the box before the Dutchman drives his strike through the legs of Travers. A fine team goal. Palace now have a two-goal advantages

What a game! The corner into the box is headed on by Mepham into the path of the unmarked King at the back post, who pokes the ball in! This is not over!

Goal : 80′ Andros Townsend 5 – 3
Palace have five! It’s a devastating counter-attack.
Zaha skips by Clyne and Lerma before he pokes the ball with the outside of his boot for Townsend, who is free on the right, before he guides the ball into the bottom corner off his left boot!
What a game this has been!