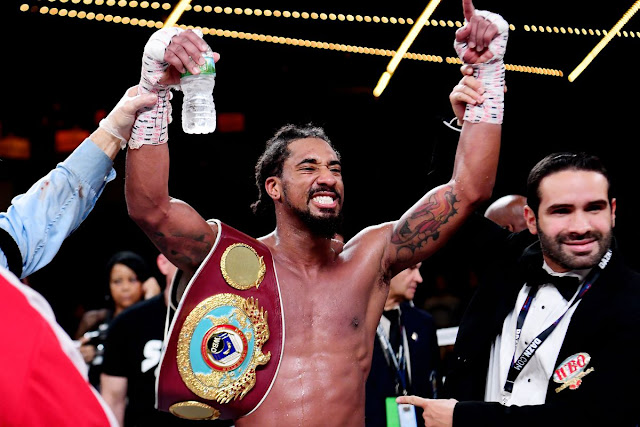 WBO Middleweight World champion Demetrius Andrade will be defending his title against Maciej Sulecki on Saturday June 29 at the Dunkin Donuts Center in Rhode Island, Providence live on DAZN in the US and Skysports In the UK.

Andrade (27-0 17 KOs) will be headlining the a show in his hometown for the first time and will be defending his title for the second time since winning the vacant strap with a wide points win over rugged South African Walter Kautondokwa. His first defense, he stopped  Artur Akavov in the final round stoppage in New York.

The fight was announced on Saturday night by Demetrius Andrade himself, during the fight at the T-Mobile Arena in Las Vegas , as Jacobs and Canelo Alvarez met for the WBA, WBC and IBF middleweight title unification.

“After tonight, there will be one guy with three of the belts, and I’ve got the fourth,” said Andrade. “Both guys (Alvarez and Jacobs) have been very vocal about wanting to unify after this fight, so let’s make it happen.
“We all feel that we are the best in the division, and there is only one way to find that out. I wish both Canelo and Danny well tonight, but they better know I’m there watching with a purpose.
“Sulecki is one of the top guys in the division, and his only loss is to Danny, in a fight where he gave Danny problems. You can’t overlook this guy. He has earned this shot, and I am expecting him to bring it. That being said, I am the best 160-pounder in the sport, and I plan on showing every single aspect of that come June 29. This is my time.”

Sulecki (28-1 11 KOs) will be entering the fight on the back of a wide points Decision over local favorite, Gabriel Rosado in Philadelphia. Winning the WBO International title after a back and forth battle. He is ranked number three with the WBO and has already fought at a world class level, taking Daniel Jacobs the distance in April 2018.

“Last Thursday I turned 30, so to fight for a World title is the best birthday gift for me,” said Sulecki. “I am in the most important moment of my career. I believe I can win and all the best is ahead of me. I think next five years can be the best in my boxing life so I must grasp it.”