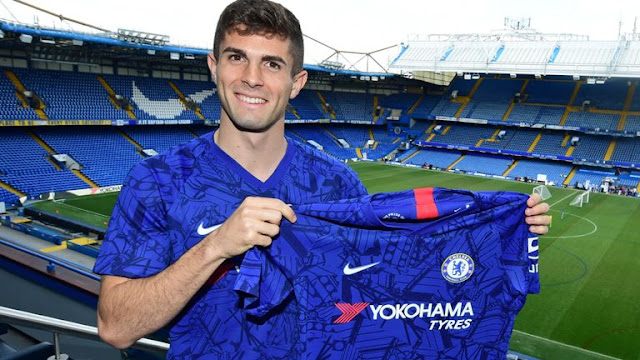 Christian Pulisic has completed his switch to Chelsea after successfully completing the 18/19 Bundesliga season with Borussia Dortmund.

The American Forward had signed for the switch to Chelsea for £57.6m in January but was tied by contract till the end of the 18/19 season.

The 20 year old see’s a model in Eden Hazard and is viewed as a long term replacement for the Belgian. This is also seen an achievable height, if he works hard.

“Of course, I want to believe that I can be the best player I can possibly be.
“That’s why I work so hard every day and why I thought it was necessary for me to take this next step in my career and to come here. I have so much more to learn as a player and am excited to see what the future holds.
“It’s a great compliment [to be compared to Hazard], he’s obviously much further along in his career than I am. He is an unbelievable player.
“I guess I have a similar style with an attacking and creative mindset like he does, he’s very quick and shifty.
“There’s a lot to learn from him. It would be a great goal to do what he does. Everyone can see he is an unbelievable player and I would be honoured to play alongside him.

Chelsea have an active two-window transfer ban, which doesn’t stop Chelsea from buying players but are not be able to register them until the summer of 2020.

Pulisic has only been allowed to return, as his deal was completed in January before the Transfer Ban. He was actually loaned back to Borussia Dortmund for the remainder of the 2018/19 season.

Hazard’s future at the Club is increasingly looking blur, as a Real Madrid move seems imminent. This will open a room in the Chelsea frontline with a big shoe to justify his £57.6m transfer fee.