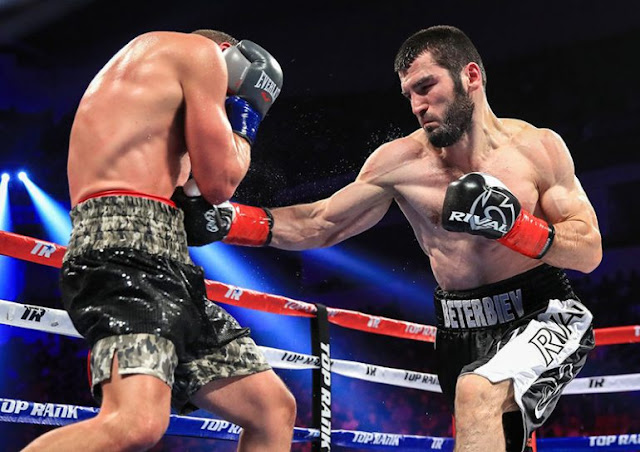 IBF lightweight champion Artur Beterbiev (14-0, 14 KOs) broke down and stopped Radivoje Kalajdzic (24-2, 17 KOs) in the fifth round on Saturday night, at the Stockton Arena, Stockton, California.

The Unbeaten champion successfully defended his title for the second time since claiming the title with a 12th round knockout win of Enrico Kölling in Nov. ’17. He remains the only fighter with a 100% KO rate.

Beterbiev knocked Kalajdzic in the third round and from then on totally dominated the fight till the stoppage victory in the fifth round.

Beterbiev came into the fight, firing all cylinders, while his opponent came in with a defensive and counter technique, which was concluded the best strategy by the Serbian team and coaches but Kalajdzic  didn’t have enough power to slow down Beterbiev.

In round two Beterbiev made up for his short comings in the first round, connecting right hands on Kalajdzic, who came into this fight on a two fight first round  knockout streak. He was beginning to feel the reach and height advantage Beterbiev was having over him.

The Round three was pretty onesidedly violent and saw Beterbiev score the only knockdown in the fight, A right hand caused Kalajdzic to fall into the ropes and despite all his efforts to avoid it being counted a knockdown, the referee already counted it one.

The 27 year old Serbian continued receiving a one sided beating  prompting a visit by the ringside physician and a call from the referee to up his game or else risk stopping the fight.

Beterbiev attacked Kalajdzic furiously at the started of the fifth round, leaving him helpless and having no replies. The referee immediately jumped in to end the contest and also stopped him from recieving further damaged

The winner of this match up will definitely be in line for a future unification fight WBO titleholder Sergey Kovalev or WBC titleholder Oleksandr Gvozdyk, who both share the same network ESPN and are also promoted by Top Rank.

Beterbiev is visibly the favorite to retain the belt but might definitely run into some problems with some physical advantages owned by Kalajdzic, who owns the height and reach advantage in this one, 6’2” with a 78-inch reach, compared to the more compact Beterbiev at 5’11½” with a 73-inch reach.

Check Back On This Page For Full Video  Highlights, Images And Recap