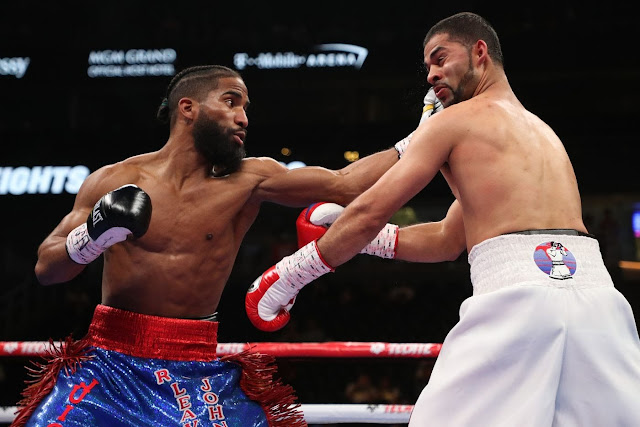 Anthony Young pull off a major upset against former Junior Middleweight Champion Sadam Ali in the undercard of Canelo Alvarez Vs Daniel Jacobs at the T-Mobile Arena.

Young was just too much for the former champion , dominated and overwhelmed him for two rounds before the referee Robert Byrd halted their scheduled 10-round welterweight bout at T-Mobile Arena.

The 30-year-old Ali (27-3, 14 KOs) was listed as at least a 12-1 favorite, going into the fight but was backed up by Young, who connected a left hook, followed it up with an overhand right that made Ali move back into corner before Byrd stopped the fight.

Young was aggressive from the opening bell, forced Ali to fight on the back foot, tried to move out of Young’s punching range to fend off his aggressive opponent.

After the furst round, Young complimented his progress in the first with another dominant display in the secknd round and when Ali attempted to ket his hands go, Young fire back with a right hand that landed to the side of Ali’s head.

Both fighters traded shots, midway through the third round but after a left hook to Ali’s body, Young landed the left hook up top that signaled the beginning of the end for Ali.

Ali (27-3, 14 KOs) lost by technical decision for the second time jn his last last three fights. Ali was stooped by Mexico’s Jaime Munguia Ali in the fourth round last May 12 to win the WBO 154-pound championship.

“New Jersey in the building,” Young said. “I had a tremendous camp. He had a great win against Miguel Cotto, but after that he fought Munguia. I thought he lost a lot of confidence with Munguia. I saw his fight against [Mauricio] Herrera [on December 15], and he couldn’t pull the trigger. So, when they offered the fight, I jumped on it. We’ll enjoy this victory now, and figure out what’s next later.”

“I don’t want to say that he was over the hill,” Young added. “But I think a lot of the confidence was taken after he fought Munguia, after the Miguel Cotto fight. He was always moving backwards, and I knew that if I just applied pressure I was going to break him down. First couple punches, I saw his reaction to it, and I thought, ‘I got it.’ ”