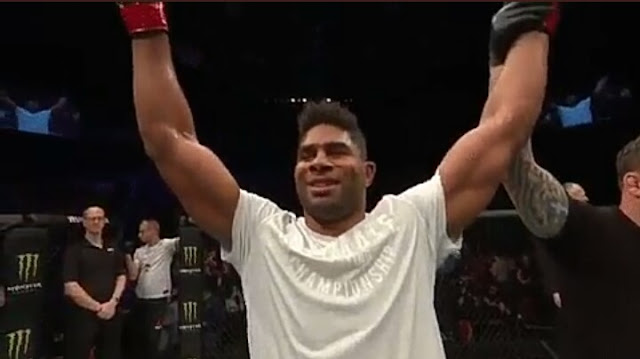 Oleinik took the fight to Overeem immediately the opening bell was heard. He had some success with his aggressive start and almost ended the fight early with hih trademark Ezekiel’s choke but Overeem maneuvered and escaped the situation.

Still Oleinik pursued Overeem, throwing looping punches all the way and one of those punches sent Overeem back into defensive mode. Overeem could only protect the head and left the body open.

Oleinik landed to the body at will but all of a sudden, Overeem replied with a Knee to the body but due to Oleinik’s head position, the with as high up as his chin, another knee wobbled him and sent him tottheTot canvas.

The Dutch fighter followed up his opponent on the floor with ground and pound to end the fight at exactly 4:45 of Round one.

AND THAT’S IT! 😱@AlistairOvereem closes the show in the first at #UFCStPetersburg! 🇷🇺 pic.twitter.com/6wBJkgWx7s

Speaking after the fight Overeem spoke highly of his opponent in front of the Russian Fans.

“He’s a very strong dude, he’s a veteran of the sport, Overeem said. “We trained together, he’s a friend. I didn’t like to fight him, but I have to say the experience of fighting in Russia again, this is my third time, has been absolutely great. A lot of love from the fans, so it has been my pleasure to fight here and if it’s up to me I will be back. Let’s go.”